Cardano presents trade opportunity at this price – should you take it


Disclaimer: The information presented does not constitute financial, investment, trading, or other types of advice and is solely the writer’s opinion.

Cardano [ADA] saw a break in structure and its momentum flipped to bearish after the selling seen in the past 24 hours. There was some conflict between lower and higher timeframe charts, and the inference was that another drop southward was likely.

Bitcoin [BTC] held on to the $22.2k-$23k area in the past few days. Although BTC had a bullish outlook at press time, a bearish reversal could not be counted out yet. A move above $22.6k was significant- but have the recent days of trading been a deviation before a reversal?

A drop below $22k could shift the near-term bias of Bitcoin and many altcoins to bearish. 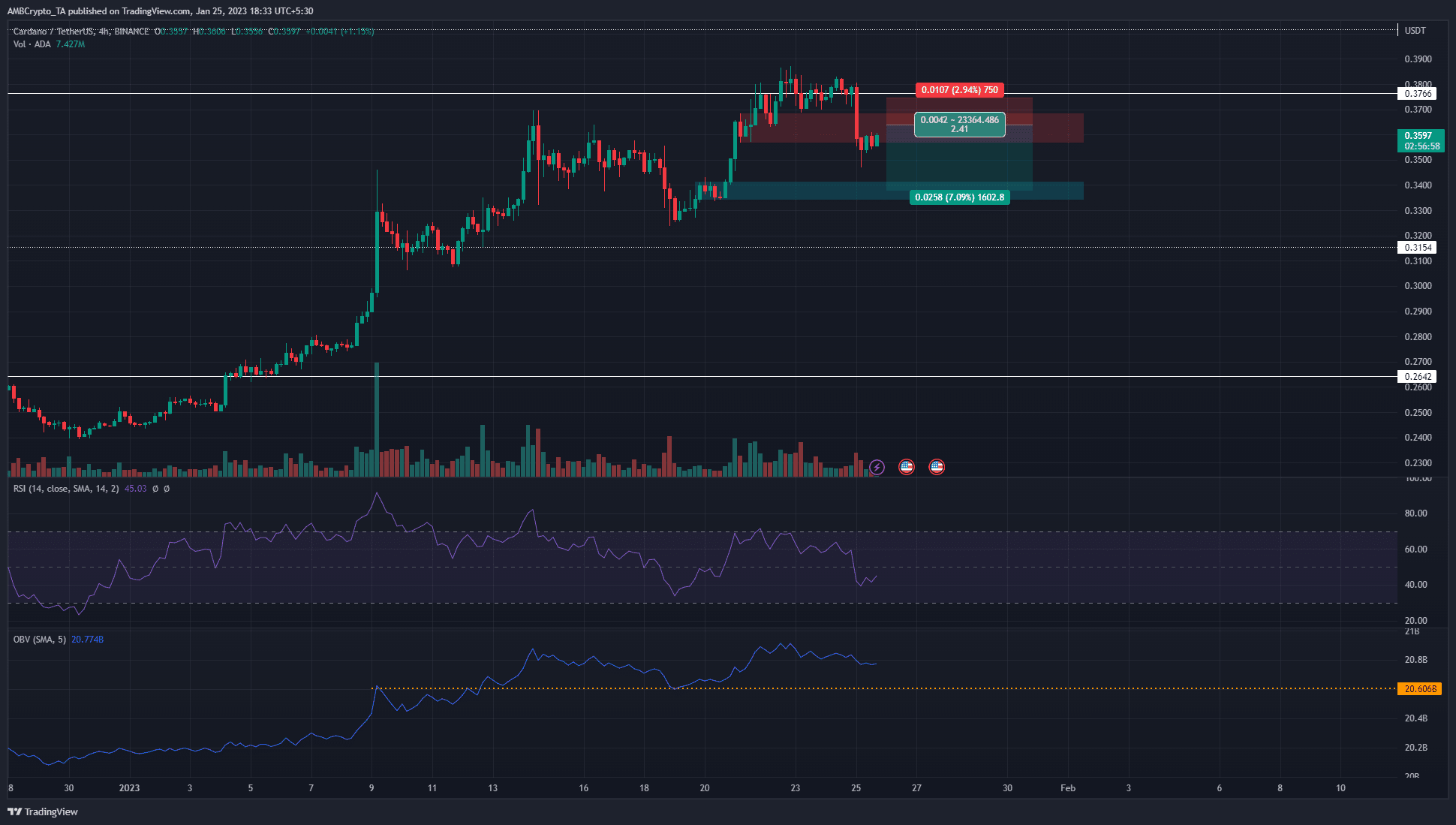 On the four-hour chart presented above, it was seen that ADA faced some resistance at $0.383. In the past few hours of trading, it was forced to drop sharply below the $0.357 mark. In doing so, the market structure was broken on the four-hour timeframe. However, the daily structure remained bullish.

This meant that aggressive traders can look to short the asset, with their entry within the bearish breaker that extended from $0.357-$0.368. Invalidation of this idea would be a session close above $0.37.

Take-profit targets lie near $0.34, where a support zone was spotted.

It remained likely that the $0.33-$0.346 area will see a strong presence from the bulls. Yet, this also depended on the sentiment behind Bitcoin over the next few days. A daily session close for Cardano below $0.326 will shift the structure to bearish.

The RSI fell below neutral 50 in recent hours to show some downward momentum. Meanwhile, the OBV has not slipped beneath a support level from earlier this month, which meant bulls were still in the fight.

Since Bitcoin was at a critical location, confirmation of a bullish continuation or deviation could take some time to form. Given the bullish structure on the daily timeframe, ADA bulls can wait for a move to $0.34 or $0.325 and a bounce in prices thereafter, before bidding.

Is your portfolio green? Check the Cardano Profit Calculator

The funding rate on Binance was positive, and the age consumed metric did not see a dramatic spike since early January 2023. Thus, the sentiment was bullish and large movements of ADA tokens were not witnessed, something that can precede intense selling waves.

The positive MVRV ratio meant holders were in profit. The ratio reached a three-month high two weeks ago, and it remains to be seen if holders will offload their bags. A bearish structure break could encourage them to do so. On the other hand, the rising 90-day mean coin age metric showed an accumulation phase was in progress.

Can Cardano hit $1 in February? ADA price catalysts to look out

Cardano’s weekly update looks bullish, but will it give relief to short-term holders