Cardano: Will this upcoming feature cement ADA as the ‘Ethereum killer’?


Ethereum [ETH] could be in for tough competition in 2023 as Cardano [ADA] investors eagerly await the launch of Djed, the first algorithmic stablecoin on the network.

The official Twitter handle of the stablecoin had announced earlier on 14 January that the much-awaited launch will happen in January 2023.

And yes, $Djed is still on track for launching THIS month 🚀

In 2021, Cardano developer Input Output HK (IOHK) entered into a joint partnership with the fintech platform COTI to build and issue the network’s stablecoin, Djed.

Cardano builds up on its arsenal

As per a COTI blog, Djed is an over-collateralized algorithmic stablecoin pegged to USD. It is backed by Cardano’s native coin ADA and uses SHEN as its reserve currency, to offset the impact of ADA’s price fluctuation.

To go with this, the developers will also roll out Djed Pay, a payment app that will allow retailers and non-profit organizations to accept Djed as a form of payment.

Interestingly, the chief executive of COTI Group, Shahaf Bar-Geffen stated in 2021 that Djed could be used to settle transaction fees on the Cardano platform in the future. It is worth noting that no specific update has been provided on this aspect nor has anyone from Cardano confirmed this.

Meanwhile, ADA continued its bullish run as it shook off the post-FTX gloom to record gains of about 35% since last month. At press time, the price faced resistance at 0.347 even as the trading volume dipped by 25% as per CoinMarketCap.

The indicators suggested that the massive buying pressure which was seen last week had started to fade. The Relative Strength Index (RSI) climbed down from its highs while On Balance Volume (OBV) too recorded a similar trajectory. That said and done, the market sentiment for the coin still remained bullish. 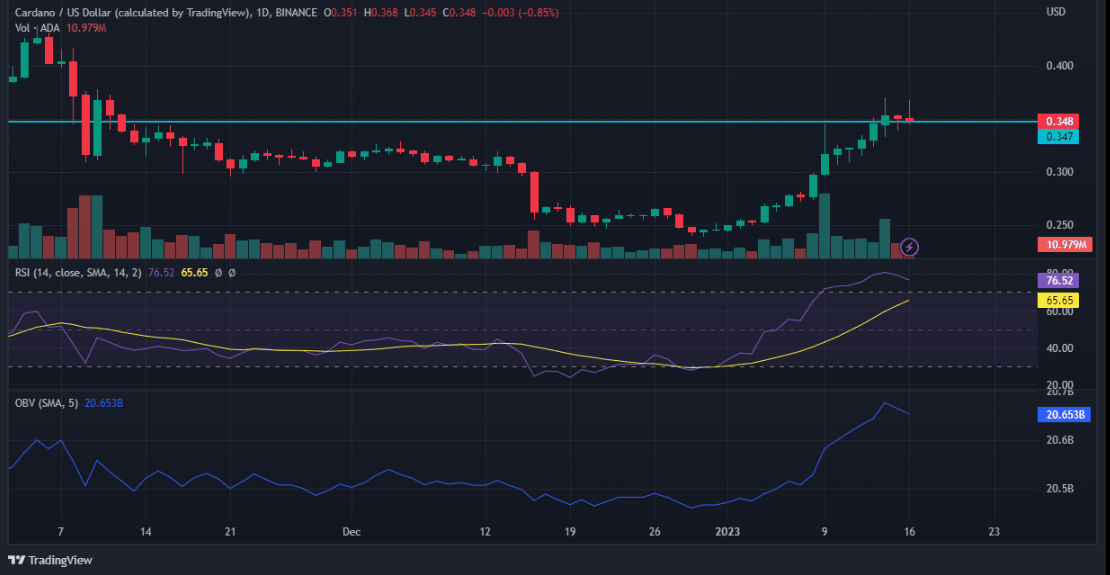 Well, the Development Activity has aggressively ascended since the start of 2023, reassuring the Cardano community of the network’s commitments to enhancements.

Other on-chain indicators responded positively to Djed’s launch announcement on 14 January. But since then, the activity has subsided. The frequency with which coins moved across the network dipped after hitting 3.25 on the day of the announcement.

Social buzz also cooled down after attracting a lot of traction on 14 January.

Is your portfolio green? Check out the Cardano Profit Calculator

Unlike other volatile cryptocurrencies, stablecoins are not free-floating and hence provide stability, especially during bear markets. Stablecoin dominance, or basically their share in the crypto market hit almost 17% at the peak of last year’s great crypto crash.

Previous articleDigital euro can’t be programmable: Eurogroup
Next articleEV Charging Payments Are Moving Onto Blockchain Thanks to C+Charge