The price of Ethereum has increased by 1% over the last 24 hours, and at $1,269, it has recovered 15.8% from its five-month low price of $1,095.18 on Thursday. This low occurred as a result of the repercussions from the FTX collapse, which continues to put the market at risk of contagion.

Ethereum’s chart at this time depicts a coin that may be starting to recover. Its relative strength indicator (purple), which was at 30 just a few days ago and is now surging toward 50, indicates that some momentum has been regained. 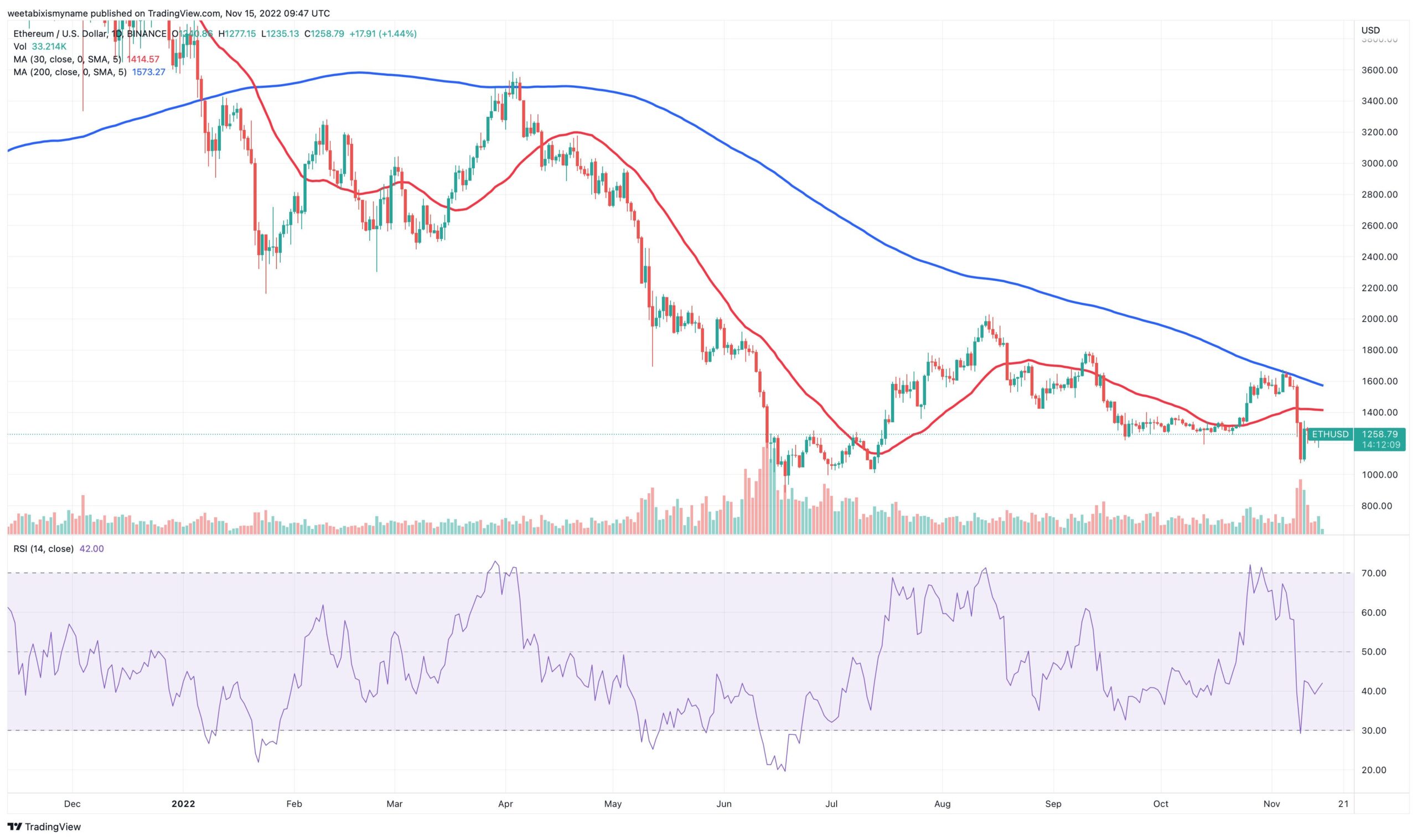 Given that it is again getting close to its 200-day average (blue), ETH’s 30-day moving average (red) also suggests that momentum may be returning. Technically and chartistically speaking, ETH should soon experience a comeback rally because the coin is undervalued in comparison to recent levels.

Of course, there is still a great deal of uncertainty and unrest in the market. The FTX bankruptcy and collapse undoubtedly caused the most immediate and direct harm, but other businesses, especially those that FTX or Alameda Research invested in, may see difficulties in the following weeks.

The sector is well aware of the possibility of contagion it faces, and many exchanges are taking every available step to reassure their investors and clients that their individual finances are stable. For instance, Changpeng Zhao, CEO of Binance, announced the establishment of an industry recovery fund yesterday. This fund would likely aggregate resources to be used in the event that a major company experienced a liquidity problem.

It is still questionable at this point if such steps will be sufficient to stop all potential contagion effects given the magnitude of FTX and Alameda Research. Investors should therefore be cautious because ETH (along with other cryptocurrencies) may face greater declines in the upcoming weeks and months.

It’s interesting to note that none other than Ethereum co-founder Vitalik Buterin has highlighted the likelihood of further declines, as he reportedly sold out roughly 3,000 ETH (worth about $3.75 million) on November 12 after confirmation of FTX’s insolvency. Although engineers who are familiar with Buterin have contested that the wallet in issue belonged to him, the dumping of substantial amounts of ETH highlights the fact that whales expect continuous decreases.

Commentators have also asserted that regulators will have to scrutinise the remaining ecosystem more closely as a result of the stunning failure of FTX. This includes Ethereum, which some claim has increased the likelihood of enforcement action by switching to proof-of-stake.

Despite these worries, ETH is still one of the market’s most fundamentally sound coins. It is without a doubt the largest layer-one blockchain in terms of total value locked in, having famously — and successfully — made the switch to a proof-of-stake consensus method in the middle of September.

Additionally, it appears that after the aforementioned Merge, ETH has been deflationary, with fewer new coins being created and more coins being burned. Ironically, the demise of FTX has ironically contributed to the coin becoming even more deflationary as holders have been removing their ETH from exchanges, increasing the number of transactions and, thus, the amount of burning.

This would imply that ETH is in a very strong position to make some significant gains once the global economy and cryptocurrency market both revive. Although they are unlikely to occur this year, there are some hesitant indications that the world economy may be slowly recovering as US inflation is beginning to decline and the war between Ukraine and Russia is progressing.

In order to retake the $18,000 level, Bitcoin has surged over the $16,000 support level. It is now consolidating within a constrained trading range, and any breakout will determine the direction of future price movement.

Bitcoin is consolidating in a wide trading range between $18,000 and $16,000, and the direction of the price will depend on a breakout. Bitcoin has stabilised at $18,100 after finishing a 38.2% Fibonacci retracement in the last four hours. 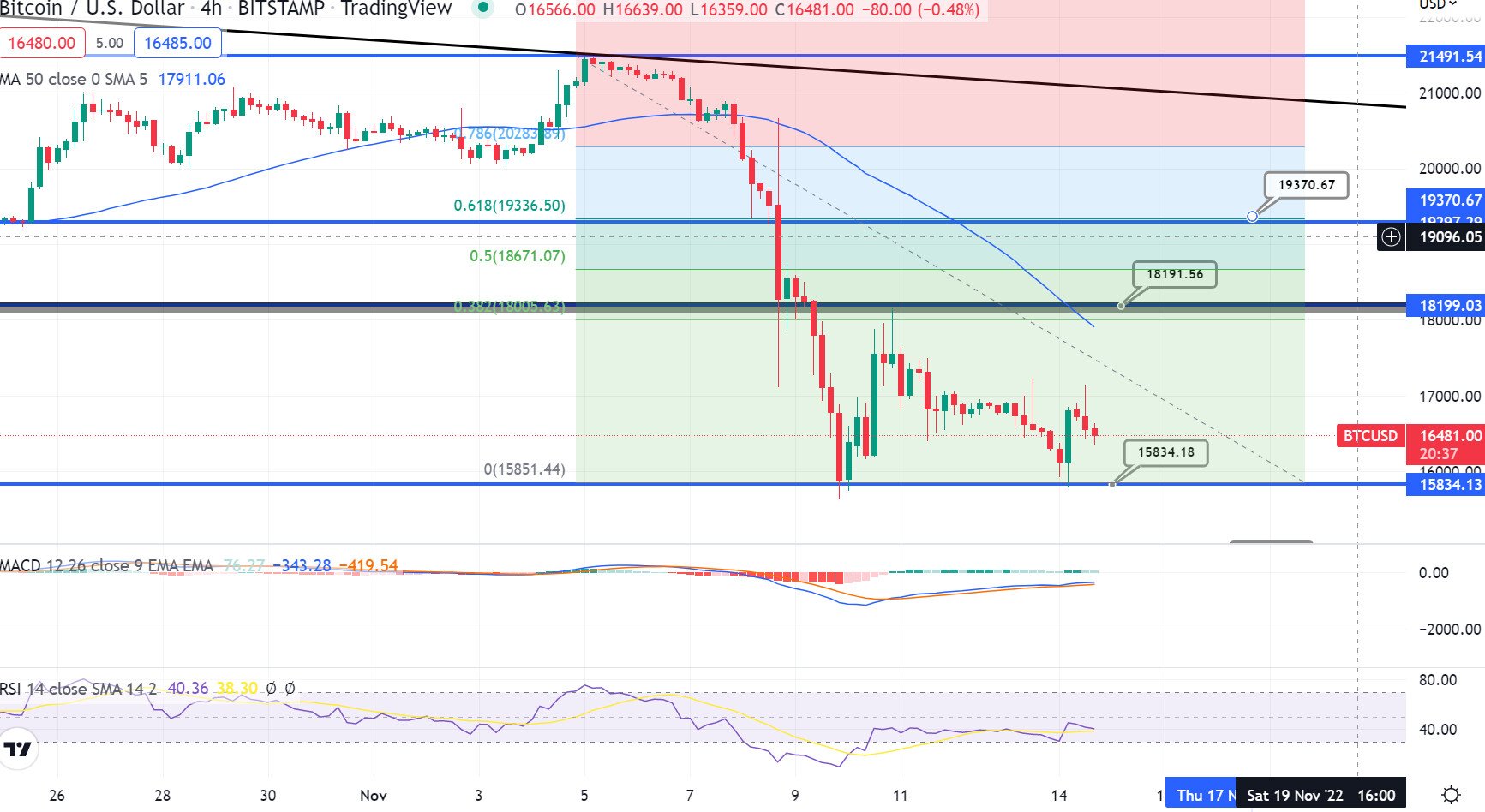 The 50-day moving average and RSI have not reached the buying zone, but the MACD, a leading technical indicator, has. BTC may drop more if the closing candles drop below $18,000; support lies between $16,000 and 15,850.

After printing a bullish candle on the four-hour chart, the price of Cardano is up a slight 1.2% today. As ADA goes north of its primary support at $0.3000, higher support around $0.3300 is anticipated to be helpful. 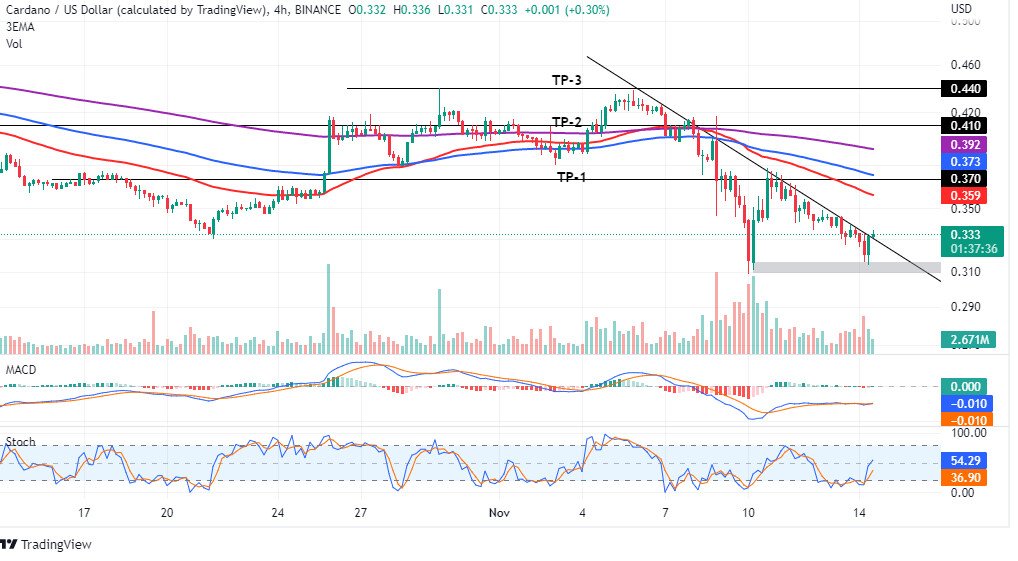 The bulls’ expanding influence on the price is reinforced by the Stochastic oscillator’s advance from the oversold region (below 30.00) to above the midline. Because of its positive divergence from the price, buyers appear to be in control and prepared to move up the ladder.

Due to a purchase signal that the Moving Average Convergence Divergence (MACD) indicator just issued, the positive outlook for Cardano may continue unabated. For ADA, traders must wait for a four-hour candlestick to settle above the declining trend line at $0.3300 before initiating long trades. Take-profit levels that could be reached on the upside are $0.3700, $0.4100, and $0.4400, respectively.

The XRP Ledger (XRPL), a decentralized, open-source technology, was introduced in 2021….