Cardano trying to establish footing at $0.50 after rollercoaster week


UPDATE: Cardano price is trading just below the psychological $0.50 level, at the time of this update (14.00 GMT), after a rollercoaster week. ADA is one of the few high-cap cryptocurrencies that has avoided +20% losses over the past seven days, spending the last five ones actually in neutral territory. Cardano had already crashed 50% during early May, setting its interim low at $0.40 on May 12, a level that has not been close to being tested during this crypto brutal month of June. A support level at $0.45 has been respected twice on May 28 and June 14, which may bring Cardano bulls some hope of a relief rally in case the general mood surrounding the crypto market finally improves. That said, ADA bulls should probably need to exercise caution as advised in the main thesis of this article.

Cardano price action is hard stuck between two high-time frame-resistance barriers that are likely to restrict its movement. On a lower time frame as well, ADA seems to be trading between a short-term support level and a resistance barrier. However, a closer look reveals that the so-called “Ethereum-killer” is likely to sweep for sell-stop liquidity before establishing a directional bias.

Cardano price flipped the $0.776 weekly support barrier into a resistance level on May 7 as it crashed 58% by the second week of May. While the downswing came close to knocking on the weekly support level at $0.380, it did not.

Regardless, the recovery that followed set equal lows on June 13 and 14 at $0.435 as ADA rallied 25%. However, the run-up was premature and got rejected by the intermediate hurdle at $0.550.

This rejection is likely to push Cardano price lower and sweep the equal lows at $0.435 to collect the sell-stop liquidity. Doing this will signal that the downward pressure is exhausted and that ADA will climb higher.

Therefore, investors that are impatient will get chopped.

After the liquidity objective is completed, market participants can expect Cardano price to rally 26% and tag the $0.550 barrier. If the bullish momentum is enough, ADA might flip this hurdle into a support floor. 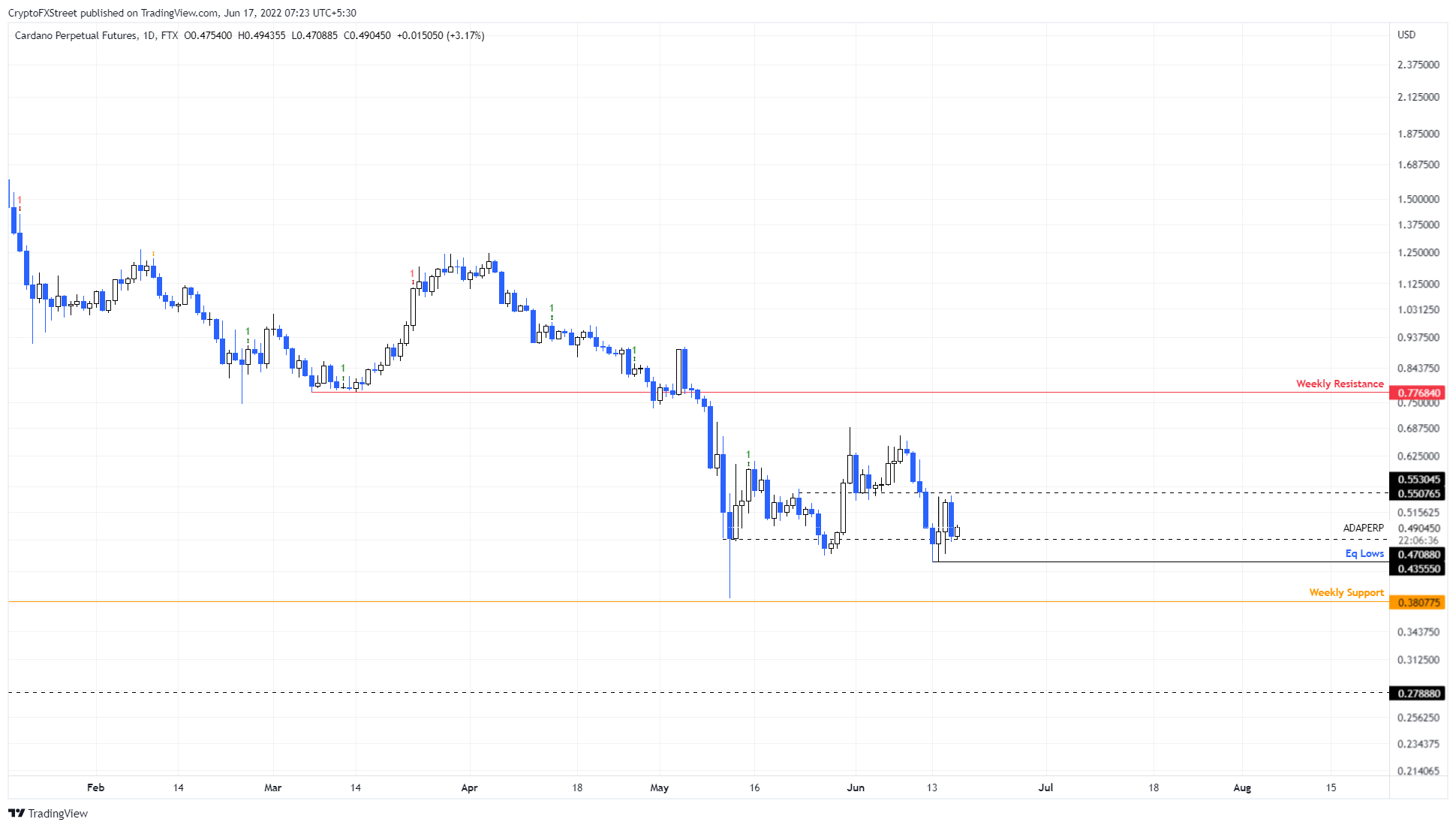 On the other hand, if Cardano price produces a daily candlestick close below the weekly support level at $0.380, it will invalidate the bullish thesis for ADA. This development could crash Cardano price by 26% to the $0.278 barrier.

Previous articleBest Metaverse Coins To Buy for 2022
Next articleParody Coin (PARO), Shiba Inu (SHIB) and Polygon (MATIC) – Coins That Could Take Over the Crypto Space Soon

Cardano (ADA): How Risky is It Sunday? – InvestorsObserver