The cryptocurrency world is in the public eye again amid the Russia-Ukraine war. Ukrainian ministers have tweeted about the war-torn country’s readiness to accept donations in cryptos. After starting with Bitcoin, Ether, and Tether in the early phases, Ukraine is now also accepting the meme token Dogecoin to boost its war efforts.

Meme cryptos start as a joke, but with time, some of these like DOGE and SHIB have become top assets by market cap. As of writing, both these tokens featured in the top 15 positions on the CoinMarketCap list. Why are these so popular? Let’s find out.

The country started with BTC, ETH and USDT donations in the face of Russia’s invasion. According to reports, tens of millions of dollars have so far been raised in cryptos. On March 2, the vice prime minister called upon people like Elon Musk to donate Dogecoin by giving a wallet address. The country is also said to have collaborated with blockchain network Solana in its ‘Aid for Ukraine’ campaign.

Separately, the Uniswap project is helping Ukraine in raising ETH by facilitating the swapping of other crypto tokens with Ether.

Also read: 3 cryptos to watch if you are a cryptocurrency beginner

Though there is no universally accepted definition of meme tokens so far, usual characteristics include the beginning of the cryptocurrency as a casual digital token supported by a community. Sometimes such tokens gain popularity in a short span of time, thanks to regular discussions on platforms like Reddit.

What may add more sheen to such projects is the backing received from some influential billionaire like Elon Musk. Mr. Musk, who happens to be the world’s richest person, has expressly tweeted about Dogecoin, and a few of his tweets may have been seen by some as implicitly supporting another meme token Shiba Inu. This support of Musk led to meme tokens making strides last year.

Also read: Why are NFTs valuable?

Here are the top 3 meme currencies by market cap.

Dogecoin’s price appreciation has been so steep that it now has a multi-billion-dollar market cap. As of writing, the market cap was over US$15 billion, which made it the top meme token. The trading volume of DOGE was over US$500 million in the past 24 hours, but the price was under pressure.

Dogecoin describes itself as a “peer-to-peer” digital currency. Backers claim that the DOGE token can be a tipping currency on social media networks. As it is based on a blockchain, Dogecoin transfers among peers do not involve the participation of any intermediary like a bank. This is claimed to make transactions quicker and cheaper.

The project uses the Scrypt mechanism for validation, and Elon Musk tweeted in 2021 about working with its developers to improve the “efficiency” of the network.

Also read: GALA, ALICE & RARI: 3 gaming cryptos to watch in the near term

Some may say that SHIB is more popular than DOGE. As of writing, however, the market cap of almost US$12.5 billion placed SHIB below its biggest rival DOGE. But in the trading volume over the past 24 hours, SHIB outshined DOGE.

What makes Shiba Inu a close watch in the near term is the project’s upcoming launches that include a stablecoin SHI and a blockchain network Shibarium. Tether, one of the cryptos sought by the Ukrainian government in donations, is today the most popular stablecoin, pegged to the USD.

SHI may challenge the supremacy of Tether. Shibarium may go on to compete with the Ethereum network that is trusted by a large group of developers for smart contracts, NFTs and blockchain games. 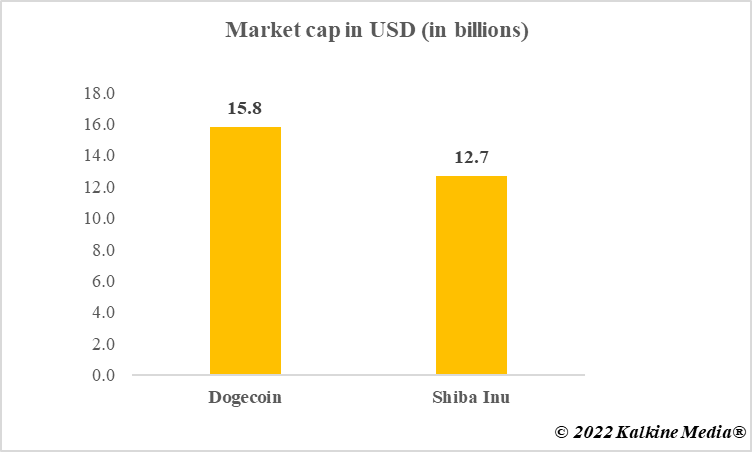 The project seems to be riding the meme token wave by including in its name some parts of Dogecoin, with ELON as the ticker.

The ELON crypto is a comparatively newer meme token, which uses elements of Ethereum like ERC-20. A fictional backdrop is set where the Dogelon dog is undertaking an adventurous journey through the galaxy. The ELON crypto had a market cap of nearly US$390 million as of writing, with a trading volume of nearly US$9 million over the past 24 hours.

Dogecoin may have started as a meme with support from a group of enthusiasts, but it seems to have manifested its utility when Ukraine sought donations in the DOGE token. By this measure, no one can just simply write off meme tokens.

That said, these assets can gain or lose heavily over a short span of time. But this is the case with all cryptos including the biggest, Bitcoin. DOGE, SHIB, and ELON are the top meme tokens by market cap.

Risk Disclosure: Trading in cryptocurrencies involves high risks including the risk of losing some, or all, of your investment amount, and may not be suitable for all investors. Prices of cryptocurrencies are extremely volatile and may be affected by external factors such as financial, regulatory, or political events. The laws that apply to crypto products (and how a particular crypto product is regulated) may change. Before deciding to trade in financial instrument or cryptocurrencies you should be fully informed of the risks and costs associated with trading in the financial markets, carefully consider your investment objectives, level of experience, and risk appetite, and seek professional advice where needed. Kalkine Media cannot and does not represent or guarantee that any of the information/data available here is accurate, reliable, current, complete or appropriate for your needs. Kalkine Media will not accept liability for any loss or damage as a result of your trading or your reliance on the information shared on this website.