Buy the dip? Those are probably the three words on many cryptocurrency investors’ minds right now. The prices of two of the most popular cryptocurrencies — Bitcoin (CRYPTO:BTC) and Dogecoin (CRYPTO:DOGE) — are down more than 40% from their highs set earlier this year.

But there’s another question that’s an even better one for cryptocurrency investors to ask themselves: Are there other alternatives to buy on the dip that could generate greater long-term returns? I think the answer to that question is a resounding “yes.” Here are three growth stocks to buy that could easily be bigger winners than Bitcoin and Dogecoin. 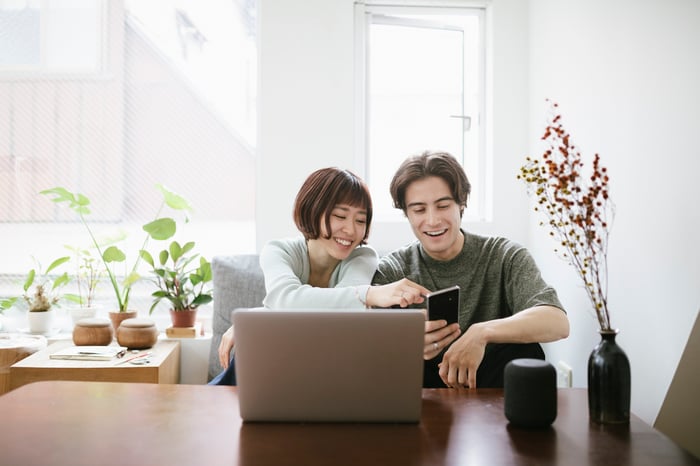 Gores Holdings VI (NASDAQ:GHVI) shares are currently down more than 40% from the peak in February. The carnage was even worse. Over the past week or so, the special-purpose acquisition company (SPAC) stock has soared nearly 20%.

The clock is ticking for the merger of Gores Holdings VI with spatial data pioneer Matterport. This transaction is expected to give Matterport an initial market cap of close to $2.9 billion. That valuation might seem ridiculously high considering that Matterport will probably generate revenue in the ballpark of $120 million this year. However, the company’s growth prospects could make it a much bigger winner than either Bitcoin or Dogecoin over the long term.

Matterport creates 3D digital twins of physical spaces. Over 250,000 customers (including 13% of the Fortune 1000) already use the company’s platform. The opportunities for Matterport’s technology span from facilities management and real estate marketing to insurance pricing and interior design and more.

The company’s total addressable market tops $240 billion. I don’t expect that Matterport will come close to capturing that full market. It doesn’t have to, though, to still be a huge winner. Matterport projects that revenue in 2025 will approach $750 million. If it achieves that goal, this stock will deliver tremendous gains over the next few years.

There’s another beaten-down SPAC stock that has begun a strong comeback in recent days. Social Capital Hedosophia Holdings V (NYSE:IPOE) shares were more than 40% below their record high by late April before rebounding. However, it’s still a buy-on-the-dip candidate, with the stock almost 30% off its peak.

You won’t have to wait very long for the SPAC to complete its merger with fintech company SoFi. The deal is expected to close on May 28 with SoFi beginning trading on the Nasdaq stock exchange on June 1.

SoFi meets nearly every financial need a consumer might have in one app. Its app includes a digital wallet for paying bills and friends. Users can buy and sell stocks and cryptocurrencies. They can apply for loans. The SoFi app can tie in with a SoFi credit card. And members can earn rewards for using the app.

SoFi thinks it will generate adjusted net revenue of $3.7 billion by 2025 — nearly six times higher than its 2020 total. That’s the kind of growth that should enable this fintech stock to make investors a lot of money.

Now for a pick that isn’t connected with a SPAC — Beam Therapeutics (NASDAQ:BEAM). The biotech stock is still close to 40% below its high from earlier this year despite a double-digit percentage jump over the past couple of weeks.

Beam Therapeutics is a pioneer in genetic base editing. Gene editing has made tremendous progress in recent years. However, most biotechs use approaches that cut the genome akin to using genetic scissors. Beam’s method, though, is more like using a pencil to erase and rewrite a specific mutation in a gene.

Beam is by far the riskiest of the stocks mentioned. However, if its base-editing approach is successful, the stock should have enormous growth potential over the long run that could be better than that of Bitcoin or Dogecoin.