Should You Invest in Dogecoin in 2021?


Cryptocurrencies have made quite the splash in the investing world over the last few months. Dogecoin (CRYPTO:DOGE) is a type of cryptocurrency, similar to Bitcoin (CRYPTO:BTC).

Although it’s existed since 2013, it’s gained popularity recently. Some people credit Elon Musk for driving up the price of Dogecoin by tweeting about it, and many retail investors are jumping on the cryptocurrency bandwagon.

Cryptocurrencies are the shiny new thing, and some investors could potentially make a lot of money. But is this alternative investment right for you?

Dogecoin: Weighing the pros and cons

Cryptocurrency, in general, is a risky investment because it can be extremely volatile. Back in January of this year, Dogecoin’s price climbed nearly 400% within a matter of days. Just a couple of weeks later, its price fell from its peak by nearly one-third. 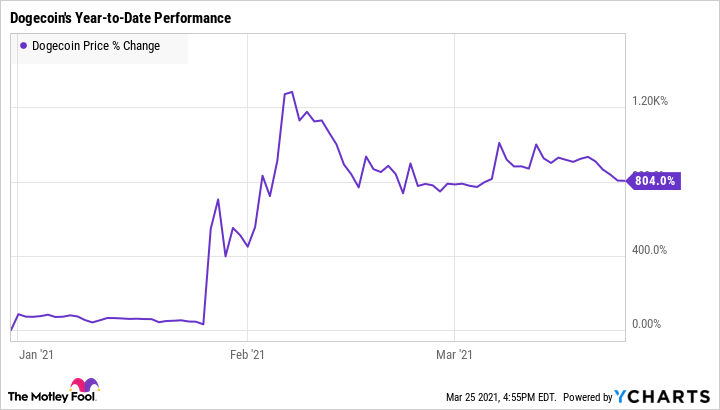 Dogecoin is especially risky because it doesn’t have as much credibility as other cryptocurrencies, primarily Bitcoin. Dogecoin was created as a joke based on a meme, and it shot to popularity after investors in online communities like Reddit started promoting it.

Similar to the GameStop saga earlier this year, Dogecoin has seen its price increase dramatically, but the fundamentals haven’t changed. Few businesses accept Dogecoin as a form of payment, and unless that changes, Dogecoin can’t succeed over the long term. Even if cryptocurrencies in general eventually become mainstream, Dogecoin itself may or may not become widely accepted.

Dogecoin has the potential to be a lucrative short-term investment. Certainly, if you had invested in mid-January and sold at just the right moment, you could have made a lot of money.

However, short-term investing is incredibly risky, and it’s a great way to lose a lot of money. Timing the market is nearly impossible, but it’s even more difficult when it’s a speculative investment like Dogecoin that has shaky fundamentals.

If you’re not willing to hold an investment for years, it’s probably not worth investing in it. Dogecoin is an extremely risky investment without a strong track record, and there’s no telling where it will be a few years from now. For that reason, it’s probably wise to steer clear of it for now.

Dogecoin may not be a good fit for most investors, but if you’re still eager to get on the crypto bandwagon, there’s a safer option: crypto stocks.

A crypto stock is a company that has a link to cryptocurrency — either by investing in it, offering it as a type of payment, or building the technology behind it.

If the crypto market continues to explode, all of these companies could reap the rewards.

The key to investing in crypto stocks is to choose stocks based on the company’s business fundamentals. In other words, don’t invest in them simply because they’re linked to the crypto market.

Dogecoin is a risky investment that’s subject to volatility, and it’s not for everyone. Invest in this cryptocurrency only if you have a high tolerance for risk. And if you do, invest only money you can afford to lose. For everyone else, putting your money behind solid long-term investments is your best bet.