DOGE recovery to $0.1 in jeopardy as massive technical and on-chain barriers surface


Dogecoin has made a shallow recovery from the dip to $0.04 on Tuesday. The ‘Meme Coin’ is dancing slightly above $0.5 amid the push for gains eyeing $0.1. Despite the recovery, DOGE is not out of the woods yet, especially with technical and on-chain barriers in sight.

Dogecoin must step above the 50 SMA to sustain the uptrend

The 4-hour chart shows DOGE trading within the confines of a descending parallel channel. A recent break above the middle boundary adds credence to the bullish outlook. Bulls must hold above this critical level to avoid declines likely to push Dogecoin back to $0.04.

Marginally above the prevailing market price, DOGE faces resistance at the 50 Simple Moving Average on the 4-hour chart. Besides, a break past this level will run into the channel’s upper boundary and the 100 SMA hurdle, currently at $0.06.

It is worth realizing that a break under the ascending channel’s middle boundary support may renew the breakdown to $0.04. On the other hand, losses below the 200 SMA could trigger massive losses, perhaps strong enough to slice through the channel’s lower edge and extend the bearish leg to $0.035. 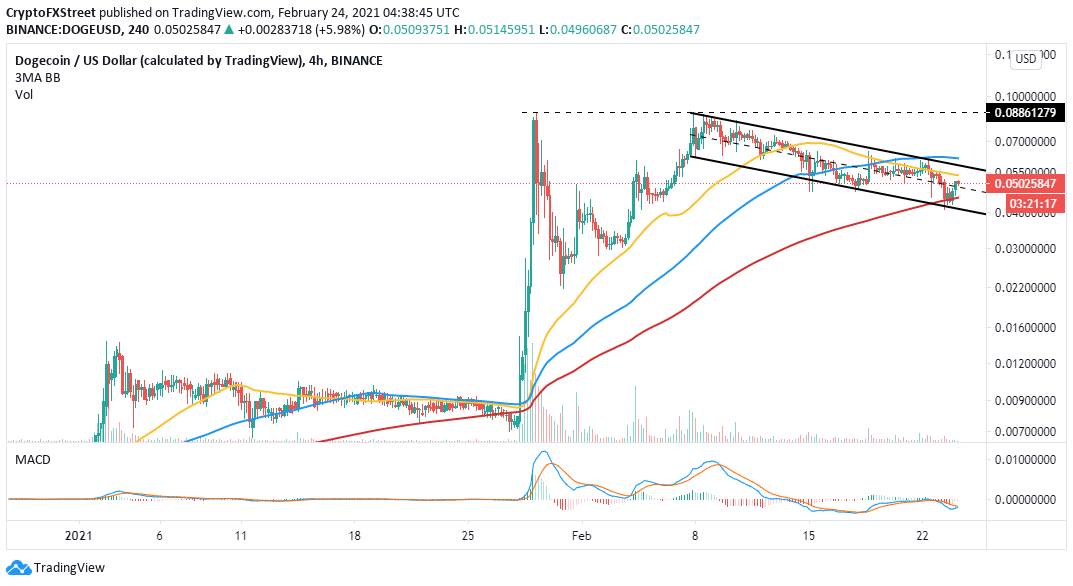 The In/Out of the Money Around Price (IOMAP) model by IntoTheBlock reveals that Dogecoin runs into immense resistance that would stop or delay the upswing to $0.1. It brings our attention to the region running from $0.05 to $0.06. Here, nearly 26,000 addresses had previously bought around 7.8 billion DOGE. It is doubtful that the price will easily slice through this zone to higher levels.

On the flip side, the available support levels are medium-strong. For instance, roughly 54,000 addressees had previously bought approximately 5.6 billion DOGE. This is relatively strong support but could be vulnerable to intense bearish forces.

Looking at the other side of the fence

Trading above the 50 SMA will leave the door open for gains to higher levels. Although a break above the channel’s upper boundary is an uphill battle, it would catapult Dogecoin above $0.07 and toward $0.1.