What is it, how do I buy it and can Dogecoin make me rich?

If the whole Gamestop and AMC situation is anything to go by, it certainly pays to be early when it comes to hyped internet investments. Whilst it seems the sensible people have cashed out their stocks of the above and made a killing, there are still a few “diamond-handed” warriors holding on, hoping to stick it to the man by holding their stock. However, for those that are actively interested in investing their hard-earned money but seemingly missed the boat with the Reddit stocks, perhaps Dogecoin has piqued your interest.

However, you’re rightly dubious over a currency that was literally built on the foundations of a funny dog meme, right? So, is Dogecoin just a stupid meme investment or worthy of your money? Can you get rich from Dogecoin? Should I invest all my money into Dogecoin today? Let’s try and decipher whether Dogecoin is worth your time.

Dogecoin was started in 2013 by two software engineers

Dogecoin is a cryptocurrency, so it’s the same as Bitcoin and Ethereum. That means that it’s tradable in the same way, and can be bought and sold at your own discretion as opposed to stocks and shares. Although it started as a joke reaction to the rise of other cryptocurrencies, it has seen an exponential rise in value.

People have got rich from buying before the hype

Yes, people have indeed made plenty of money from buying Dogecoin, and although it was very much initially intended as a joke currency, if you can afford to put a small amount of money into it then it might not be such a bad idea. Seeing as it’s anyone’s guess if it could blow up again.

Having said that, anyone who puts anywhere near close to £10k into something as high-risk as Dogecoin like the chap above is… playing a risky game.

Dogecoin has seen an impressive increase in value 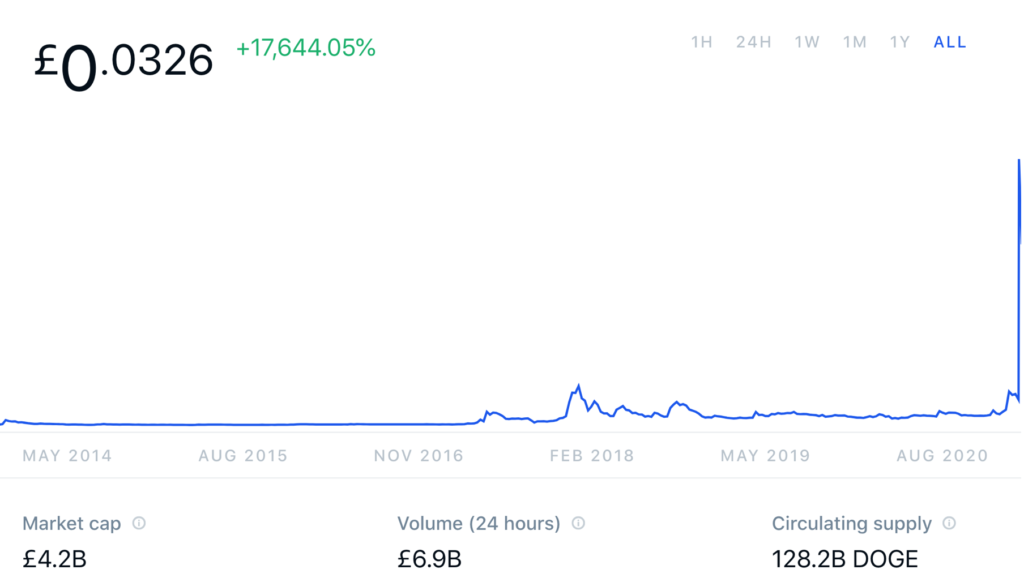 Charts like these are enough to make even the most amateurish investors just that little bit excited, but what does it actually mean? Well, for starters, that spike on the far right shows an over 800 per cent increase in 24 hours.

This shows that obviously the value of this cryptocurrency has skyrocketed, but it’s impossible to say if this is a trend that will continue or will simply culminate in a temporary spike as observed in 2018.

Dogecoin is hyped which makes it volatile

If there’s anything we’ve learnt from this whole stock market x Wallstreet Bets debacle, it’s that when the hype dies, the money often goes with it.

Due to Reddit and TikTok, as well as Elon Musk, the value of Dogecoin has risen dramatically. However, as we’ve seen with stocks such as GME and AMC, hype can only go so far before people potentially see huge losses.

As nobody can 100 per cent reliably predict the fluctuation of stocks, shares and currencies (the temptation to insert that douchey Warren Buffet anecdote was strong there but I shall resist), it’s down to your own personal risk assessment to decide if this is a good investment for you.

Related stories recommended by this writer:

• From Blackberry to Nokia: These are the stocks that Reddit wants you to buy next

• Why everyone is talking about GameStop stocks, explained as simply as we can

• ‘It’s about accountability’: This student invested £1,000 into Gamestop stocks