Many investors came into Monday expecting the worst. However, after a gap-down open, the market found its footing. With that in mind, here’s a look at a few top stock trades to watch this week. 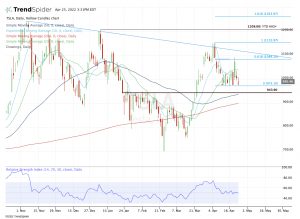 However, investors are wondering how — if it all — the deal could impact Tesla stock and you can see it in Monday’s price action.

Keep an eye on the $975 level. A break of this area, which has been short-term support, could send Tesla stock down to the $945 area where it finds prior resistance and the 50-day moving average. To see prior resistance turn to support would be rather bullish. 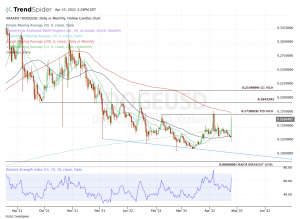 Dogecoin (DOGE-USD) is also on watch after the Musk/Twitter news.

Rocketing higher on the news, the 17.5 cent area is about to become important. There we find resistance, both from February and April, as well as the declining 200-day moving average.

If Dogecoin can power through this area, it opens the door to the 19.5 cent to 20 cent range, followed by the first-quarter high up at 21.5 cents. Above that and we will need to re-evaluate this cryptocurrency.

On the downside, though, a move back below 15 cents will have investors looking to that cluster of moving averages for support. 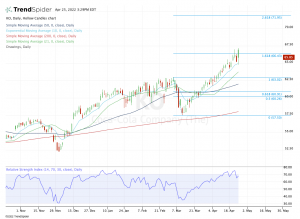 Everything appears broken, recently broken and about to break. But not Coca-Cola (NYSE:KO) stock, which hit new 52-week highs on the day.

The stock has been marching higher along the 10-day moving average for almost two months now. It bounced from that measure earlier on Monday, as it now gyrates around the 161.8% extension near $66.50.

On the downside, Monday’s low is key. If it breaks, the 21-day moving average is on the table, along with a retest of the prior breakout area near $63.

Keep in mind, the next stock on our list will report earnings before the open and could move shares of KO stock. 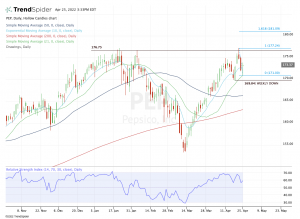 That’s right, Coca-Cola reported Monday and PepsiCo (NASDAQ:PEP) will report tomorrow. The stock is bouncing nicely on Monday, likely as the overall market rallies and as Coca-Cola bounces.

From here, watch last week’s low on the downside just below $170. A move below that level could put the 50-day in play.

On the date of publication, Bret Kenwell did not have (either directly or indirectly) any positions in the securities mentioned in this article. The opinions expressed in this article are those of the writer, subject to the InvestorPlace.com Publishing Guidelines.