Bitcoin and Ethereum traded above key psychological levels of $40,000 and $3,000, respectively, on Tuesday evening, as the global cryptocurrency market cap rose 1.9% to $1.9 trillion.

Why It Matters: Risk assets like equities were under pressure on Tuesday after the Labor Department reported an 8.5% increase in the consumer price index (CPI) for March — this is the highest such spike since 1981.

“Inflation will take care of itself if geopolitical risks improve and expectations should remain that the Fed won’t have to aggressively tighten policy and send the U.S. economy into a recession,” said Edward Moya, a senior market analyst with OANDA.

On Bitcoin, Moya said the digital asset was attempting to hold on to the $40,000 level “as crypto investors grow nervous a continuation of the bond market selloff could send risky assets much lower and trigger another rout for cryptos.”

The analyst said in a note, seen by Benzinga, that a large number of institutional investors purchased Bitcoin in 2021 between the $30,000 and $40,000 levels and this suggests they could buy this dip if they believe in the apex coin’s long-term outlook.

Higher Treasury yields have strengthened the U.S. Dollar, with the dollar index, a measure of the greenback’s strength against six peers, testing the 100 level in the last few days and buoying more than 8% for 2022.

On Tuesday, cryptocurrency trader Michaël van de Poppe asked on Twitter if a potential bearish divergence on the dollar index [was] going to “help some upwards momentum” of Bitcoin.

Potential bearish divergence on the $DXY going to help some upwards momentum of #Bitcoin? pic.twitter.com/wxaUwUFDj1

Divergences are used by technical traders to explore market momentum. A bearish divergence can signal potential downtrends when prices rally to new highs while the oscillator refuses to touch a new peak.

On-chain activity suggests weakness and a modest but sustained bout of profit-taking, which is slowing down recovery in Bitcoin, said Glassnode in its weekly missive.

Bitcoin transaction counts are near 225,000 transactions per day, which is comparable to the 2019 bear market, according to the analysis firm. Supporting the lack of on-chain activity is the lack of Bitcoin network congestion and a low aggregate transaction fee paid. 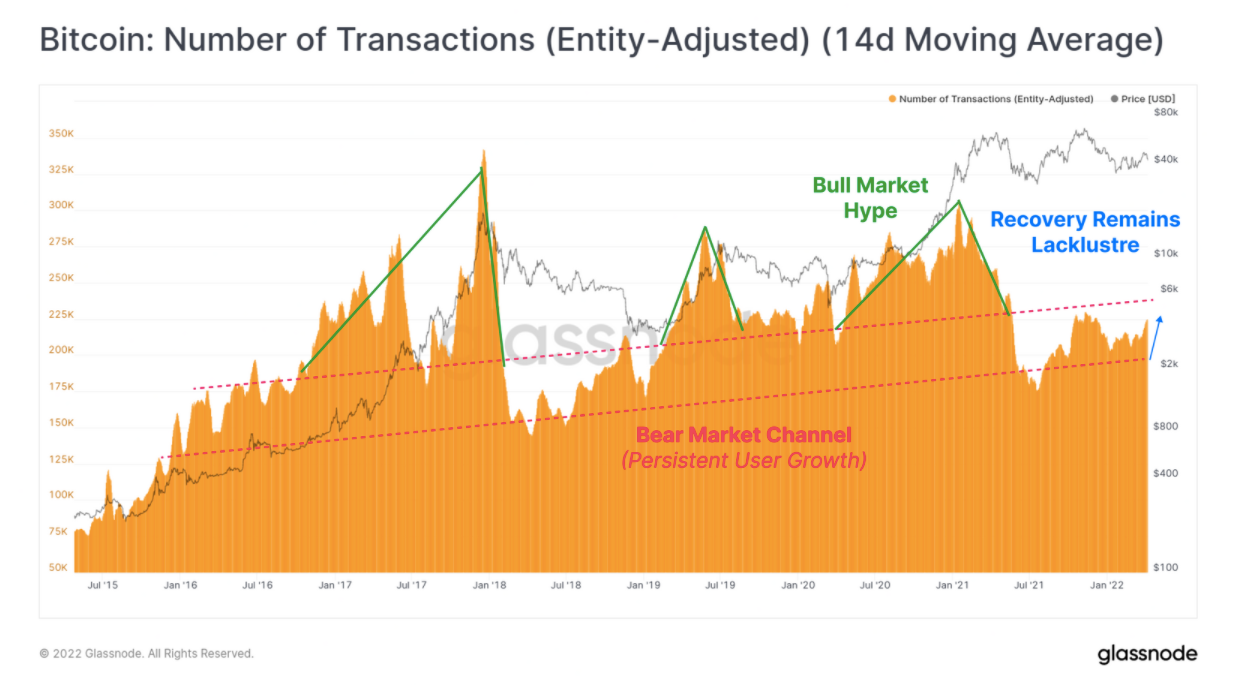 “The recovery has thus far been relatively lackluster, and continues to suggest Bitcoin is a HODLer dominated market, with few new investors flowing in,” wrote Glassnode.