Dogecoin (CRYPTO: DOGE) spiked almost 10% higher just after midnight on Sunday after Tesla, Inc (NASDAQ:TSLA) CEO Elon Musk said on Twitter Inc (NYSE:TWTR) he had no plans to sell his stake in the Shiba Inu-themed crypto, nor his position in Bitcoin (CRYPTO: BTC) and Ethereum (CRYPTO: ETH).

The surge was short lived and by Monday midafternoon Dogecoin was trading flat to Sunday’s 24-hour closing price.

Traders and investors may have felt weary knowing on Monday afternoon the European Union was set to finalize a regulatory framework that would have essentially amounted to a ban for proof-of-work cryptocurrencies if it had passed. The EU voted 32-24 against the provision, however.

Cryptos that are mined using proof-of-work are environmentally unfriendly because they require a massive amount of computational energy, and some EU parliamentarians want PoW cryptos such as Bitcoin, Ethereum and Dogecoin to shift toward proof-of-stake protocol for that reason. Dogecoin is currently mined using the proof-of-work protocol but like Ethereum, it is working to switch to PoS with the help of Ethereum co-creator Vitalik Buterin.

The general markets suffered a bearish day on Monday, which may have muted a potential bullish reaction for Dogecoin after the news came out about the vote.

See Also: How to Buy Dogecoin • The People’s Currency

The Dogecoin Chart: Dogecoin has been trading in a falling channel pattern on the daily chart since Feb. 8, making a consistent series of lower highs and lower lows between two parallel trendlines. On Monday, Dogecoin attempted to break up bullishly from the pattern but rejected and wicked from the upper descending trendline of the channel, causing it to fall down to find support at the median line of the pattern.

A falling channel pattern is considered bearish until a stock or crypto breaches the upper descending trendline of the pattern on higher-than-average volume, which can signal a massive reversal to the upside.

There currently appears to be a big battle taking place between the bulls and the bears because Dogecoin was trading flat on higher-than-average volume. By midafternoon, Dogecoin’s volume was measuring in at more than 311 million compared to the 10-day average of 167.08 million.

Dogecoin’s relative strength index (RSI) is measuring in at about 34%, which indicates at least a bounce may be on the way. When a stock or crypto’s RSI nears or falls below the 30% level it becomes oversold, which can be a buy signal for technical traders. 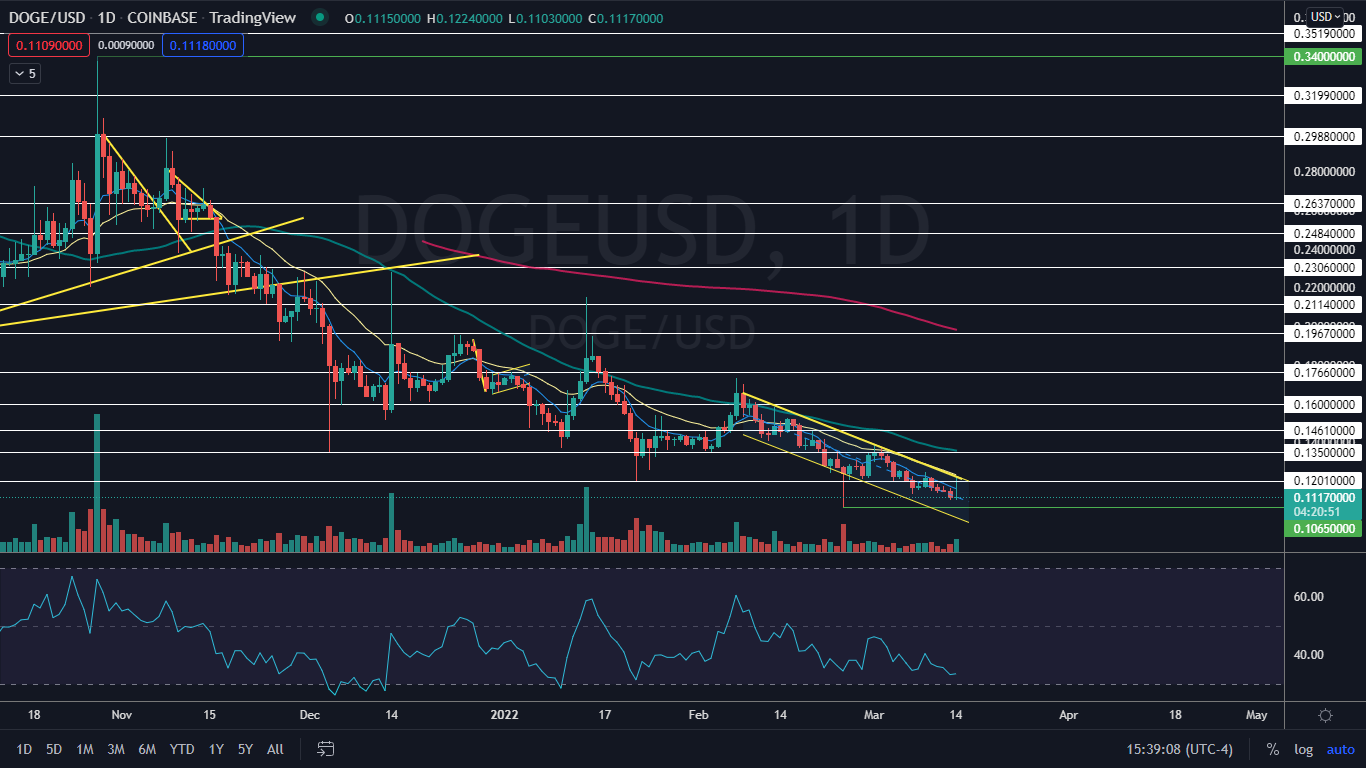