Bitcoin traded under the psychologically important $40,000 level at press time on Thursday evening, with the global cryptocurrency market cap falling 4.35% to $1.75 trillion.

Why It Matters: On Thursday, the U.S. Labor Department released inflation numbers for February. Headline consumer price index or CPI rose 7.9% in the month, above an estimated 7.8%, the biggest increase since January 1982.

Cryptocurrencies moved in line with stocks and headed downwards. However, some analysts are of the view that the apex coin may emerge as a hedge against inflation.

“Maybe the short-term price will drop due to panic, but long-term I think #Bitcoin is by far the best bet against inflation,” tweeted Michaël van de Poppe, a cryptocurrency trader.

Investment thesis with such a high inflation; would you want to be in equities, $USD, commodities or #Bitcoin?

Maybe short-term price will drop due to panic, but long-term I think #Bitcoin is by far the best bet against inflation.

The co-founders of on-chain analysis company Glassnode, Jan & Yann, tweeted that commodities look strong and there is a “rotation to value.”

A chart shared by them, depicting the top 10 assets by market cap, reveals a 15% decline in the year-to-date performance of Bitcoin, while gold shot up 14%.

Will liquidity flow to riskier assets like #Bitcoin given a 96% prob of target rates 25-50 bps? Find out here https://t.co/6eOWyypDgk pic.twitter.com/OPTdhQwUbi

Meanwhile, the put/call ratio for Bitcoin hit a six-month high of 0.69 in February amid bearish market sentiments, according to Delphi Digital.
On Thursday, the volume-adjusted put/call ratio hit a monthly low of 0.44 as call volumes rose. Deribit traders were buying April 29 BTC calls for $42,000, $50,000 and $60,000 strikes, Delphi said, boosting the notional value up to $193 million on the exchange.
“This might indicate that traders are turning bullish, even in an uncertain macro environment.” 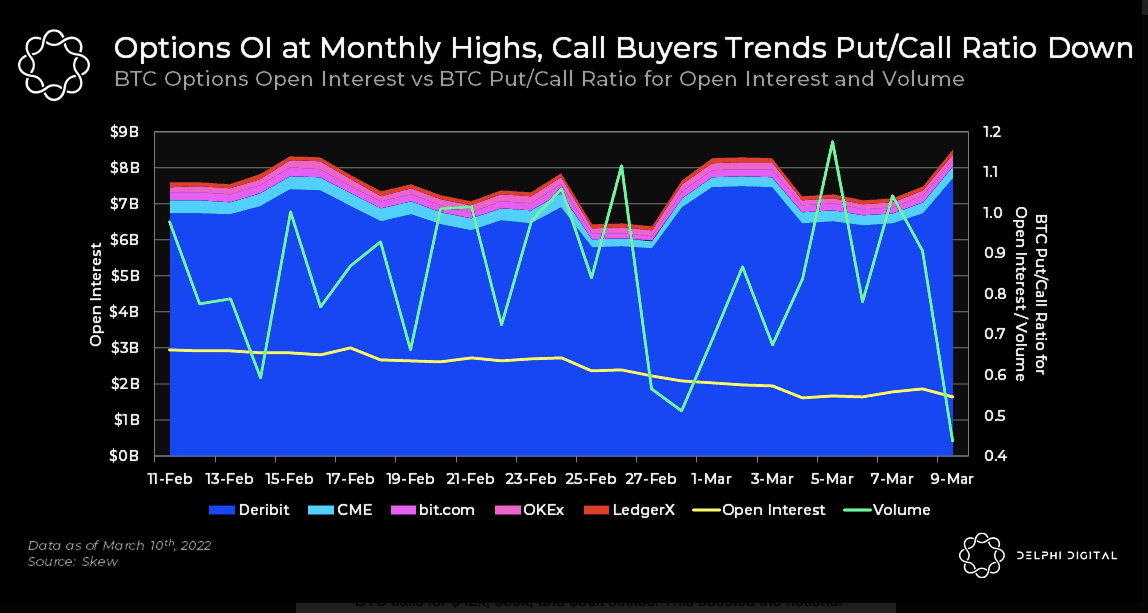 #Ethereum is staying surprisingly close to the price of the #SP500. In fact, its correlation has been much more tight than #Bitcoin‘s own correlation with the #SP500 over the past month. Also, #gold has had a spot-on inverse correlation to both.  https://t.co/3TJH7zwjcd pic.twitter.com/BPatTroxGW

Read Next: Investing Stimulus Checks In This Cryptocurrency Would Have Fetched Whopping 23674% Returns Now

Previous articleUSDC Inflow Spikes Up, Will It Act As Dry Powder For New Bitcoin Rally?
Next articleCardano: Up by 8%, the Whole Explanation Behind ADA’s Current Increase Is…