Tonight, on The Andy Milonakis NFT Show: On the one hand, the Goat Soup NFT collection’s floor price flatlined. It lost the momentum it got with the Gary Vee pump. On the other hand, a storm is brewing. Slowly but surely, Andy keeps adding utility, rolling out bonuses, and building with the community. The time of Goat Soup will come, and this show will be right there, documenting it all.

Today’s headline is that Andy Milonakis is considering recording a full hip hop album in NFT form, which will be free to mint to Goat Soup holders. In the following video, he’s trying to figure out how to technically do it and asking for ideas from the community.

But let’s not get ahead of ourselves. Let’s start with trouble.

What might be a minority of the Goat Soup community is not satisfied with the progress so far. Bellow, a pseudonymous holder tweeted to Andy, “We need some progress boss man sucks to see a project move then dip below previous floor.” And he responded, “Sell it, I’m not on your schedule.”

Sell it, I’m not on your schedule. https://t.co/KyuBW7tUKJ

Another example, a self-proclaimed NFT artist told him, “If only you were focused this much on your own project. When’s airdrop for holders?” Milonakis response, “That’s funny how much of a negative hater you are because I was airdropping people animated goats for hours yesterday.”

That’s funny how much of a negative hater you are because I was airdropping people animated goats for hours yesterday. Assuming I had no money before my drop, just because you’re a broke bitch, doesn’t mean everyone is. Stay mad https://t.co/pswMbGLfFQ

And he literally was. The animated Goat Soup’s airdrop we told you about in the previous episode had just happened.

Scenes From The Goat Soup AirDrop

This faithful Goat Soup holder that even has a goat as a profile pic got this laser-eyed monster:

was just airdropped this awesome animated goat gif (made by @e_tartist) just for being a @goatsoupnft holder.

This other Goat Soup owner got this less animated one and said, “You made my day today sending me this beauty of a Goat! Can’t wait for the rap track to land! ”

Thanks so much Andy, these are awesome!! You made my day today sending me this beauty of a Goat! Can’t wait for the rap track to land! Love the Goats! pic.twitter.com/YayEh3Uyrd

The artist for this special batch of Goat Soup, took to Twitter to give us more info. The illustrations “are all hand pixeled and manually animated.”  And promised, “Andy’s got that GOAT vision! The next batch will be extra tasty!”

To give everybody a little more info for the animated goats that I made of @andymilonakis goat soup ; they are all hand pixeled and manually animated. They are fun/special and I love each one of them! 💙🐐Andy’s got that GOAT vision! The next batch will be extra tasty! pic.twitter.com/zanYAYohZj

Andy Milonakis And The Building Blocks Of His Empire

The question is, do you believe in Andy? “Most people ape in when a hype train starts, you should be earlier than them and bet on me, cuz I aint stopping.”

Goat Soup has seen a bit of activity in the last day or two. We’re a bit over .15, Most people ape in when a hype train starts, you should be earlier than them and bet on me, cuz I aint stopping motherfuckers. https://t.co/jAfVMi8iOy

Our man is getting the respect he deserves from the NFT community as a whole. Here, receiving his flowers, Milonakis makes another promise, “I’m here to stay and can’t wait to continue to grow Goat Soup and build it into something multidimensional with the community”

so @cryptoSQRL I appreciate the trust but to respect all of my holders, I’m not going to pretend I didn’t make a nice bag off my release but also I’m here to stay and can’t wait to continue to grow Goat Soup and build it into something multidimensional with the community pic.twitter.com/ny0s4Olzu6

Here, he announces a new partnership:

This time is with the Voiceverse NFT project, and it’s for Andy himself and not for the Goat Soup collection. Still, we document it in case it turns out to be important down the road. 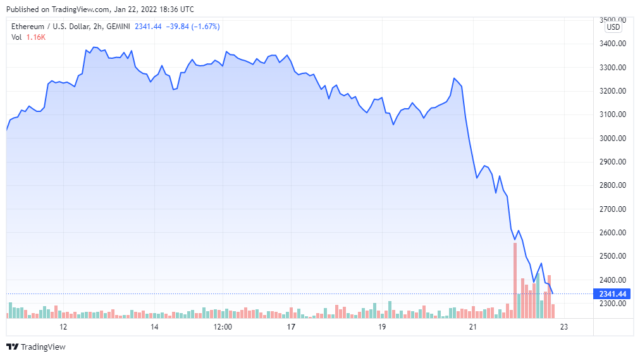 For ease of access, here’s the video we began this episode with:

What else do we know about the project? Well, about the first song, “I could see the song being released end of January easily.” Also, Andy is “Gonna write some NFT bars and mention some other series.” That means people familiar with the Andy Milonakis NFT show will be able to understand them with ease.

He’s already all-in with the whole album idea, though. “I’m gonna start making music and I’ll figure out the rest. Goat Soup holders if I put out a whole album as NFTs….You’re getting the whole album as a free mint.” However, the news of the day is, Andy is planning a contest. The person with the best verse will get a placement in the album and a 1 ETH reward.

One of the tracks should be a verse from me and then an open verse for whoever wants to jump on it and we do a contest. My favorite track gets 1 ETH or something like that

Important people in the NFT community are starting to notice the Goat Soup collection. Like YouTuber ZephPlayz, the Head of Entertainment Division Bright Moments Gallery DAO, and this guy who swept the Goat Soup floor the other day. However, a more compelling story is how Goat Soup art is invading the real world. Like this paper sticker on a wall somewhere:

Or, this jester Goat Soup in a home office somewhere:

Or, this cross-stitched Goat:

This is so cute. Great work! https://t.co/Sb87MgYmWM

Or this little animation to paste under people announcing that they joined the Goat Soup gang:

Or this pixel art illustration, whose artist promises will be the first of many

Hope to make more landscapes for the #GoatSoup community here in the near future. Goats, you know where to find me!

The floor price is just one indicator. These kinds of little, spontaneous, works of art by a community that obviously cares are the signal. The time of the Goat Soup will come.

Andy Milonakis As An NFT Collector

Selling this fast food BAYC for 6 above floor. He cute and he got an eye patch and ciggie. https://t.co/y2ue5y7P3e

On the buying side, Andy joined the Veefriends, Gary Vee’s collection:

ay @garyvee I’m a man of my word. I have “bad intentions” because by buying this I’m sucking up to you. That was my little meta joke. MEOW pic.twitter.com/X9AuoKe4Ng

Also, his partners at Bright Moments gallery gifted him a CryptoGalactican:

Plus, our hero bought “a whole family” of Twisted Tweaks:

Really love the art and the message https://t.co/yCuNVPmiFL

And finally, he paid 1 ETH for this 8Sian:

Just sniped #39 for 1ETH. Really cool one. Got a handful more but this is my favorite. Nice job @8sianNFT pic.twitter.com/SSJsOoIZvz

That’s enough NFT art for today. See you all in The Andy Milonakis NFT Show’s next episode.

What Is Blockchain? – Cardano Feed

What Is Blockchain? – Cardano Feed