The Spread and Use of Blockchains


Much attention and hype has surrounded the potential for blockchain technology to disrupt accounting processes. Mentions of this technology in companies’ 10-K forms filed with the SEC have increased dramatically over the past few years, but are still uncommon. Very few companies appear to have successfully adopted blockchain technology into their operations. A survey of 10-Ks reveals that although several companies are investigating blockchain use, many are skeptical about whether the technology will provide future profitable business and investment opportunities.

Of the many new technologies expected to transform the accounting profession, many prognosticators predict that blockchain may be the most impactful. Blockchain proponents point to potential protection against fraud and possible changes to the entire audit process. For all the attention given to blockchain technology, there is little evidence regarding its current use by businesses.

Interest in, and promotion of, blockchain technology spiked dramatically in 2017. The June 2017 issue of The CPA Journal contained articles on blockchain that offered optimistic views of the potential of this new technology. One article predicted: “By incorporating blockchain technology to their accounting information systems, companies could reduce fraud risk by maintaining a clean, secure database and a strengthened control system” (Jun Dai, Yunsen Wang, and Miklos Vasarhelyi, “Blockchain: An Emerging Solution for Fraud Prevention,” The CPA Journal, June 2017, pp. 12–14).

Another article noted the potential uses for blockchain technology:

This database structure could help prevent and detect fraudulent transactions by trading parties. The block-chain concept carries some risks, but with a built-in audit trail, these risks are manageable. The implementation of blockchain technology into corporate information systems is in its early stages, but it is likely to be adopted by diverse businesses, large governmental agencies, and various exchanges (Yigal Rechtman, “Blockchain: The Making of a Simple, Secure Recording Concept,” The CPA Journal, June 2017, pp. 15–17). 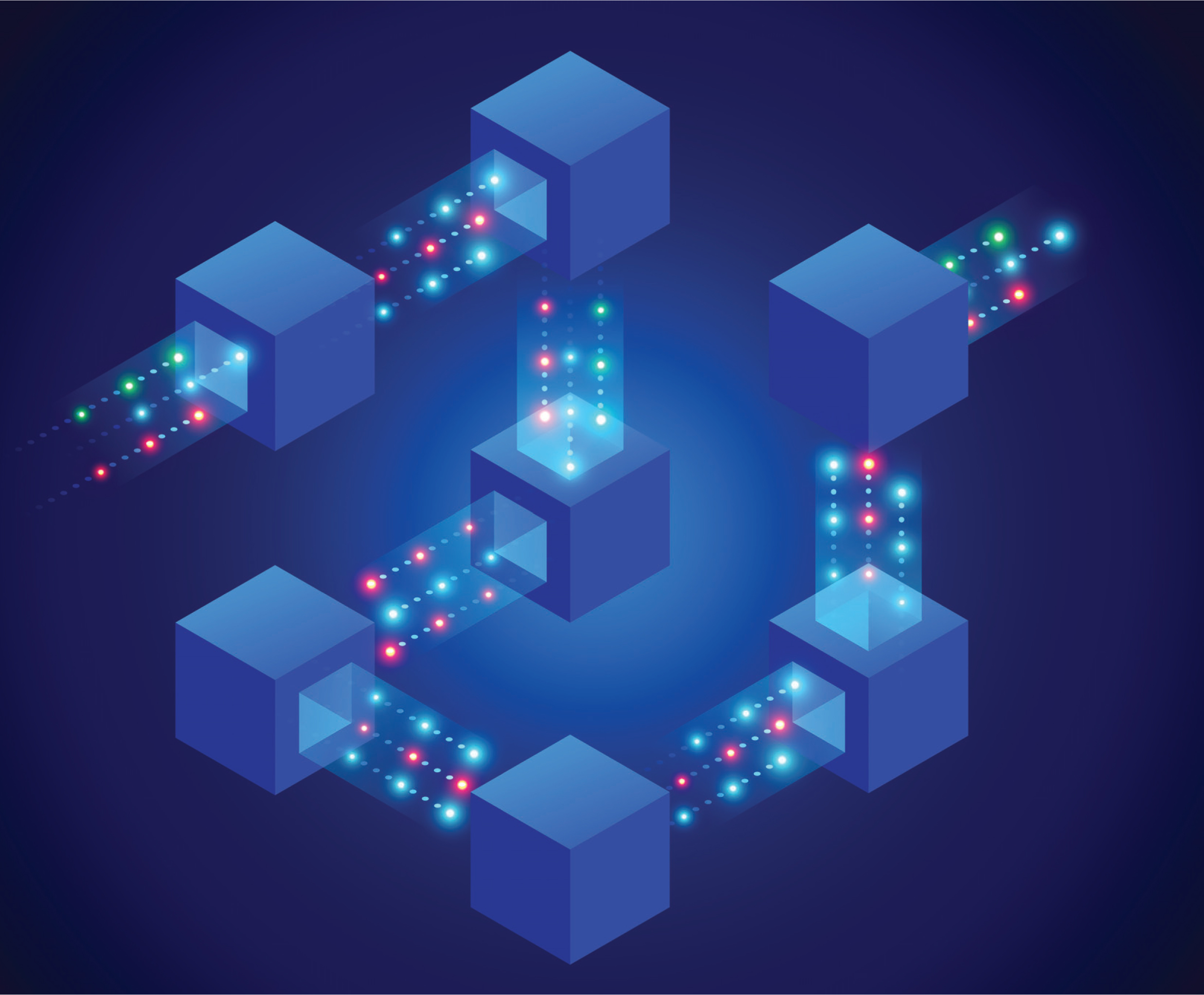 Articles published in the 2018 annual technology issue discussed moving toward adoption: “Blockchain technology has the potential to revolutionize and disrupt the accounting profession in ways that even now are not entirely clear. What is clear, however, is that blockchain will have an impact on the business landscape” (Deniz Appelbaum and Sean Stein Smith, “Block-chain Basics and Hands-on Guidance: Taking the Next Step Toward Implementation and Adoption,” The CPA Journal, June 2018, pp. 28–37). The future uses of blockchains included speculation that “while the change is massively disruptive, this author believes it will ultimately be for the better. Just as the Internet changed the way the world viewed information, blockchain will change the way people view trust” (Joe Murray, “The Coming World of Blockchain: A Primer for Accountants and Auditors,” The CPA Journal, June 2018, pp. 20–27).

By 2019, blockchain-based assets were in use enough that The CPA Journal contained articles on how to handle accounting and tax reporting issues related to cryptocurrencies (Mordecai Lerer, “The Taxation of Cryptocurrency: Virtual Transactions Bring Real-Life Tax Implications,” The CPA Journal, January 2019, pp. 40–43; Andre Sterley, “Cryptoassets: Accounting for an Emerging Asset Class,” The CPA Journal, June 2019, pp. 6–7). Sterley noted that “accountants with a deep knowledge of cryptoassets and blockchain technology are already increasingly in demand, as an intricate understanding of both the technology and accounting standards is required to provide appropriate guidance.” Another article mentioned the potential benefits of blockchains in audit practice: “Tomorrow, data analytics could replace sampling techniques with analysis of all transactions and accounts. Eventually, blockchain and distributed ledger technology could make confirmations a thing of the past” (Kathleen Hamm, “Keynote Address: Cybersecurity: Where are We, and What More Can Be Done?” The CPA Journal, August 2019, pp. 34–39).

More skepticism about blockchain was evident in 2019. Gartner Inc., a leading research and advisory company, surveys organizations’ Chief Information Officers (CIOs) each year. The 2019 CIO Agenda survey indicated that slightly fewer than 5% of the 2,835 CIOs responding thought blockchain would be a game changer for their organization (Kasey Panetta, “CIO Agenda 2019: Exploit Transformational Technologies,” Gartner Inc., 2018, https://gtnr.it/3oE4ltJ). An October 8, 2019, Gartner press release mentioned disillusionment with blockchain applications. Gartner experts estimate blockchain technology will not live up to its hype in business applications in the immediate future (“Gartner 2019 Hype Cycle Shows Most Blockchain Technologies Are Still Five to 10 Years Away From Transformational Impact,” https://gtnr.it/3oCCsSF).

Other observers questioned the purported benefits and suggested that blockchains may make it easier to commit fraud, or more difficult to detect and prevent:

Numerous articles have touted the emergence of AI, blockchain, data analytics, and RPA as tools to be used by auditors to combat fraud. Consider, however, this thought: fraudsters will look to take advantage of the same technologies to commit more damaging and robust frauds than have previously been possible [Mark Nickerson, “Fraud in a World of Advanced Technologies: The Possibilities are (Unfortunately) Endless,” The CPA Journal, June 2019, pp. 28–34].

A KPMG report discussed two instances of fraud in 2016. The report concluded that the underlying block-chains worked as expected and the frauds could have been prevented (Kiran Nagaraj, Sam Wyner, LaDarius Goens, and Eamonn Maguire, Securing the Chain. KPMG, May 2017, https://bit.ly/3f5KGzJ). In early 2019, however, security analysts for the digital currency exchange Coinbase uncovered more than $1 million of fraudulent transactions in the blockchain ledger for the cryptocurrency Ethereum Classic: “The attackers were able to rewrite the supposedly permanent ledger of transactions, something that should be impossible. That raises hard questions about the future of the blockchain, particularly for smaller coins” (Russell Brandom, “Why the Ethereum Classic Hack Is a Bad Omen for the Block-chain,” Verge, January 9, 2019, http://bit.ly/2MtT7Zk).

Other technology experts have questioned the reliability of blockchain ledgers. For context, one example where block-chain has been touted as a way to greatly improve transparency and trust is in the agricultural supply chain (Vidhya Abhijith, “Farm to table: Blockchain to trace food back to its source,” Code-wave, November 18, 2018, https://bit.ly/3wndwRS). Using blockchains, food could be traced from a particular field in South America to a particular grocery store in New York. This traceability could greatly assist in tracking the source of food-borne illnesses and reducing the mislabeling of food products. Potential challenges and barriers to full traceability, however, include costs and access to the blockchain “in all locations, such as on-the-high-seas and remote farms” (J. Lindley and A. Graycar, “Regulating the Food Supply Chain through Blockchain” The Regulatory Review, December 28, 2020, https://bit.ly/3vlBcWK).

Form 10-Ks filed with the SEC should provide information to investors about new technologies that can impact the future cash flows of companies. Exhibit 2 shows the breadth across industries of the 162 companies mentioning blockchains in fiscal year-end 2018 10-Ks. The vast majority of companies mentioning blockchain technology are in the manufacturing, finance, insurance, real estate, or services industries. Exhibit 3 categorizes these companies by the reason blockchain technologies were mentioned in their 10-Ks, and provides wording in sample companies’ 10-Ks for each category. 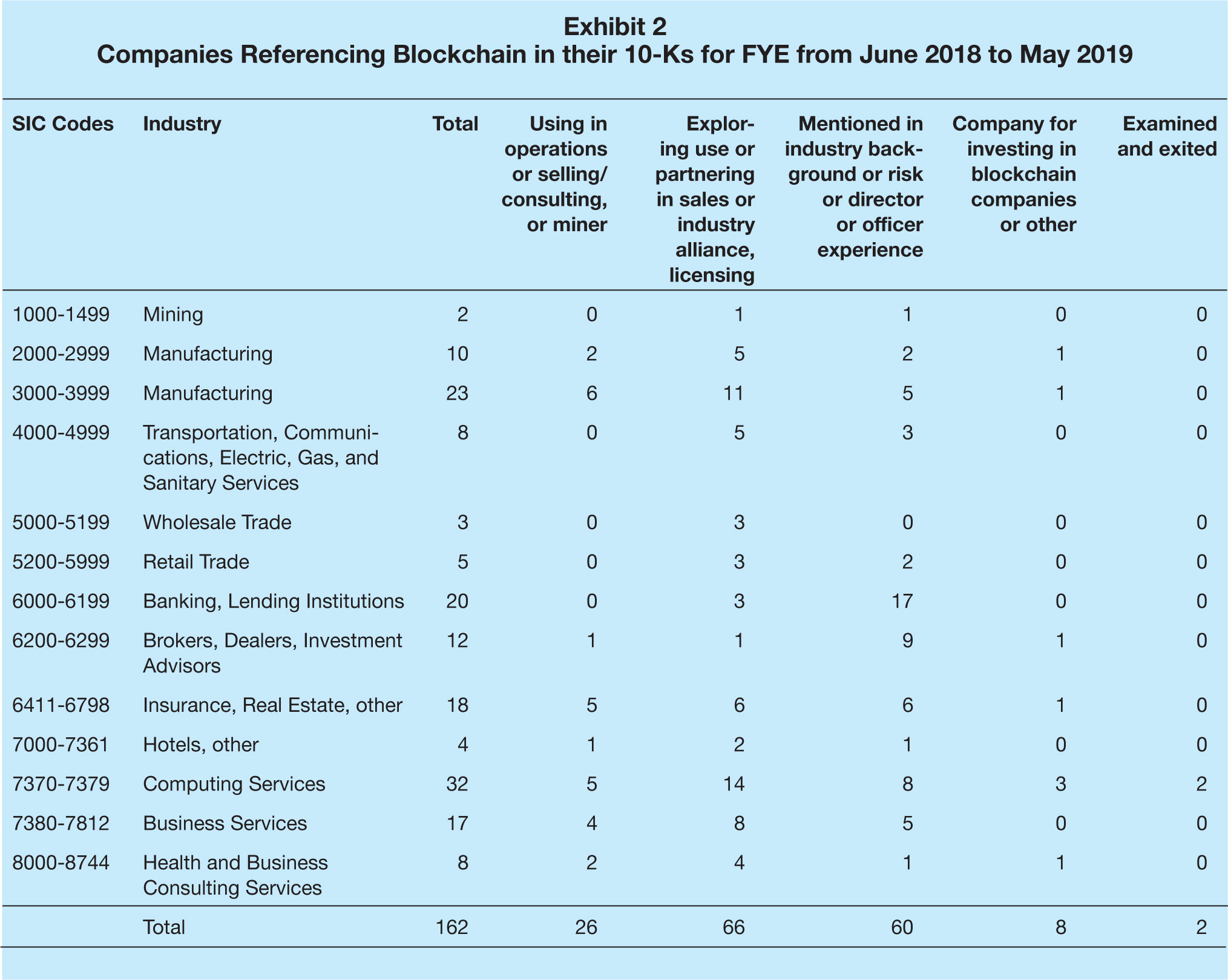 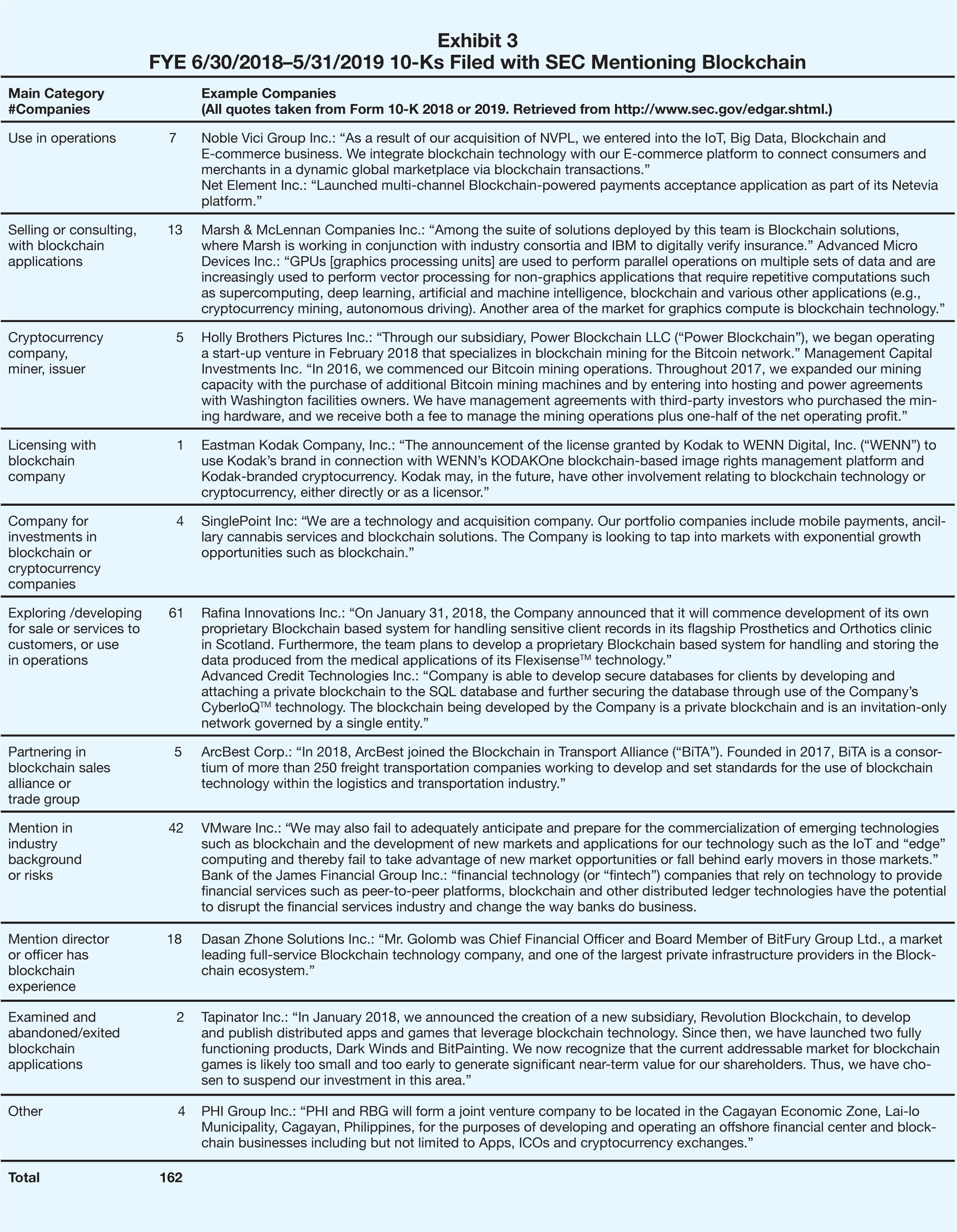 The authors’ search of fiscal year–end 2018 10-Ks filed with the SEC confirms that skepticism toward the use of blockchain technology is warranted. Certainly, the widespread use of blockchains is years off in the future. A very few companies appear to have successfully adopted blockchain technology into their operations. However, others are investigating and deciding whether block-chain investments provide an entry into the use of a new profitable leading-edge technology, or generate profit-bleeding–edge expenditures on a technology whose benefits are far in the future.