Dogecoin has had one of the most bullish movements in 2021. While this meme coin made new highs, it lacks the fundamental strength and problem solving capabilities. Ever since the breaking of all time high levels, it has failed to take support from multiple support levels.

Long term support of 200 DMA was recently broken in an instant. While the year low of $0.0044 is still too far away, Dogecoin is still in a danger zone. Breaking its long-term support level of $0.15 to $0.16 levels can push this cryptocurrency on the path to retest its year low valuation.

On technical charts, DOGE shows immense weakness, so much that there is barely any sign of buying happening around. Even the MACD indicator has plunged into small range-bound waves, as it references the momentum in May 2021. Moreover, another strong support is active around the 5 cent line, which has consistently been developed as a long-term buying zone. With these risks in mind, we can expect Dogecoin to outperform to return towards a bullish zone, only if it can break the trendline and trade above the 27 cent resistance.

Rise to all time high took Dogecoin just a month, but fall to half way mark has taken more than two months. However, all hope is not lost. There are still some signs of buying happening in a shorter time frame. As Bitcoin price plunged below its $30000 mark, so has immense selling pressure on all cryptocurrencies. 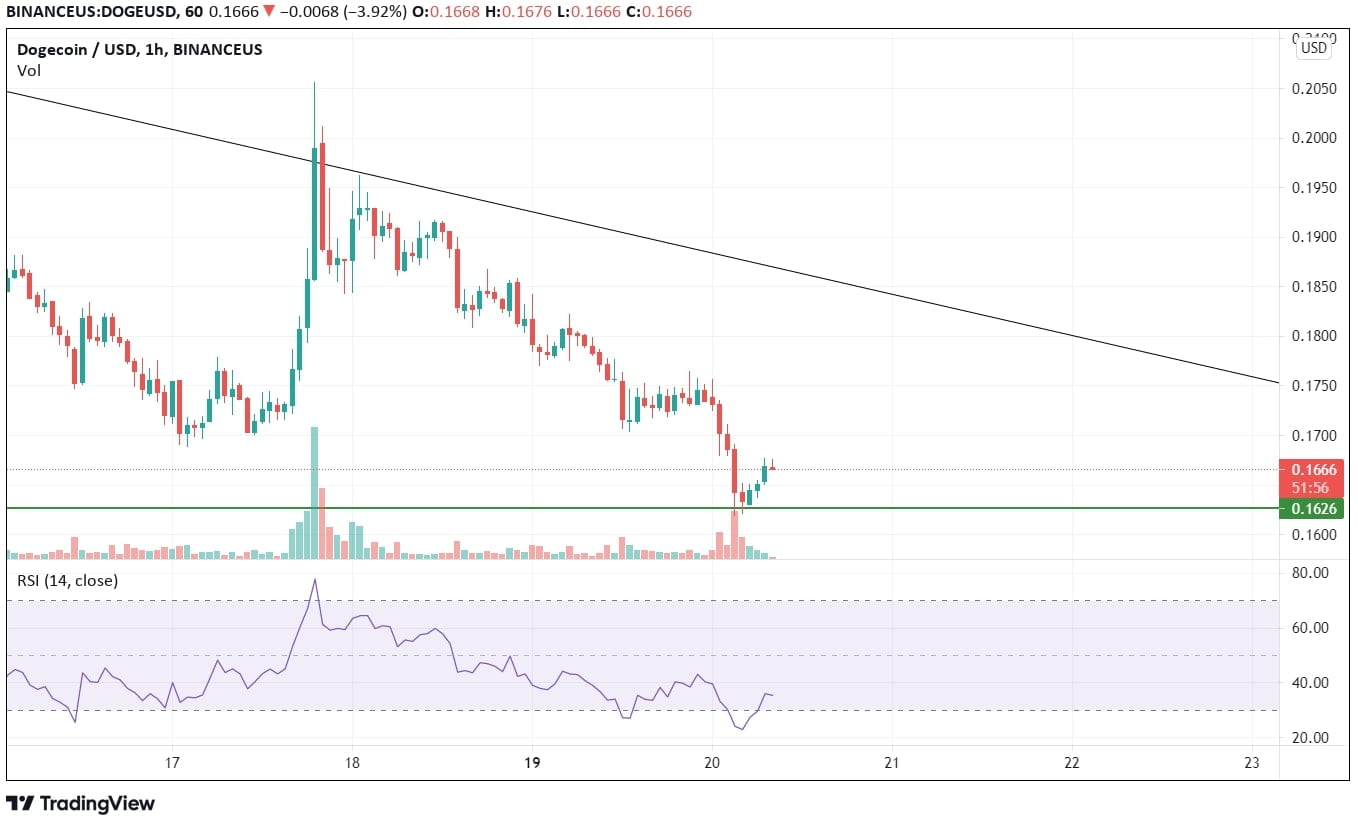 On hourly charts, it is clearly visible that Dogecoin has been giving false breakout and is unable to repeat the momentum even on an hourly time frame to induce some positivity. A follow through breakout is nowhere to be seen.

After falling from its 27 cent resistance, DOGE has been on a consistent downtrend towards the 16 cent line. There are some signs of buying at the 16 cent line, but it could be a false breakout again. Hence traders should wait for some clarity and let Doge create a more decisive breakout by trading over the trend line.

RSI is retracting from a level close to the oversold zone. It is slowly moving upwards. It is currently at 35.8, which indicates negative sentiment. Further momentum in DOGE should be expected only if it is able to break the trend line and create a positive trend even in a shorter time frame.

Based on our price prediction of Dogecoin, one should keep buying on a shorter time frame as a reversal is on the table. So, in order to not miss the reversal buying trend, one should create at least a 10% investment strategy.