Unlike Dogecoin, Clover Health’s Stock Crash Is An Opportunity


Enduring big declines is a part of investing. Volatility will find you whether you own shares of individual stocks, an index fund, or an alternative asset like cryptocurrency. It’s the price of admission for long-term gains.

When a potential investment crashes, it can be hard to know if it is an opportunity or a trap. For instance, Clover Health (NASDAQ:CLOV) and Dogecoin (CRYPTO:DOGE) have fallen 45% and 75%, respectively, from their peaks earlier this year. Despite the similar trajectory, there are a few reasons Clover Health gives investors a much better chance to compound their money over time. 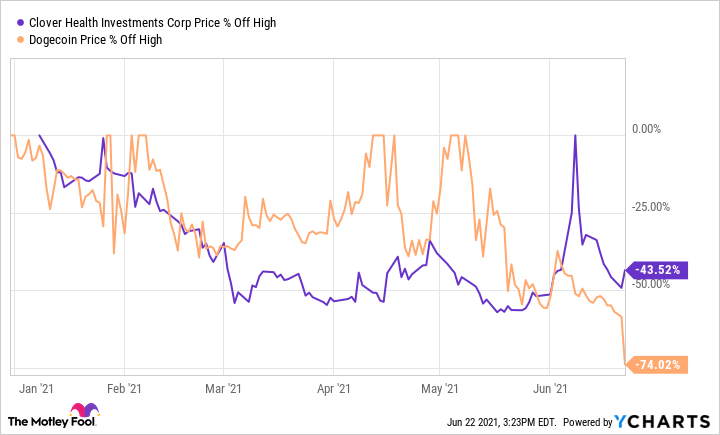 Clover Health was co-founded in 2014 by serial entrepreneur Vivek Garipalli. He still serves as the company’s CEO. Its mission is to improve every life. It aims to do this by using artificial intelligence (AI) to help physicians reduce cost and improve decision making at the point of care. Management believes if it shares the value it creates with consumers and insurers, it will be the plan of choice in any market it enters. Those new members generate more data allowing its AI engine — called Clover Assistant — to make better recommendations for care.

Until recently, the company had only operated in the Medicare Advantage market. That segment of the insurance industry is growing 14% per year and is expected to reach $590 billion by 2025. It’s a huge opportunity. And since its launch in July 2018, the Clover Assistant has been leading to better outcomes for physicians in the eight states it serves. Physicians using it have experienced a medical cost ratio (MCR) of 82% compared to 93% for those not using it. The MCR is the percentage of reimbursement spent on care. Doctors sign up for Clover’s tool because that extra 1,100 basis points (11%) of savings is profit for Clover and the doctors to share.

Now, Clover is dipping its toe into the market for original Medicare through a Direct Contracting entity (DCE). This new payment model is an experiment by the Centers for Medicare and Medicaid Services (CMS) to determine if a geographic approach to value-based care can reduce costs and improve clinical outcomes for its members. Value-based care refers to the arrangement where the insurer is paid a fixed amount per person for coverage and keeps savings as profit while booking overages as losses.

Clover has been growing share in its established markets each year since 2013. It has also been expanding its footprint. That has pushed its membership number to more than 66,000 at the end of March. Although it isn’t profitable, the company is inching toward breakeven on an adjusted basis.

For 2021, management is projecting revenue to be between $820 million and $850 million. Adjusted EBITDA is expected to fall between a loss of $240 million and a loss of $190 million. That’s due to both the cost of people seeking care that was deferred during the pandemic, as well as growth investments in marketing and technology. Although the costs aren’t welcome news for investors, they should allow the company to scale the service to more members. It could counterintuitively shrink the amount of time it takes the company to turn a profit. Shareholders will need to keep a close eye on whether the spending pays off.

Clover Health also has two independently-run businesses under its control. The first, Clover Therapeutics, was created to work with Medicare members to study diseases that affect older Americans. It has a research agreement with Genentech, a unit of Roche Holdings, for ocular diseases. None of its four drug candidates have entered human trials to date.

The second company, SeekMedicare, is a consumer-facing entity that helps seniors find the best Medicare plan for their situation. Using both conversations and a questionnaire, the service aims to find plans that incorporate a customer’s current medications, doctors, and desired coverages.

A business or a meme

Despite seeing its stock fall in recent months, Clover has a business that is growing and is offering new services. It’s also demonstrating value for its primary customers — physicians. Add to that a couple of businesses working to help the consumers it targets, and a reasonable case can be made that Clover could be much larger in the years ahead.

On the other hand, Dogecoin is a cryptocurrency that, despite being traded a lot, is hardly accepted anywhere. It also has no mechanism for generating cash flow. The choice seems obvious. Gambling on Dogecoin might provide some entertainment value, but over the long term an investment in shares of Clover Health has a chance to earn investors a real return.

Fear And Greed: Sentiment Turns Neutral As Bitcoin Stagnates, What To Do?

In cryptocurrencies, Bitcoin prices today continued to trade below the $40,000 mark as the world's largest...
Read more

Fear And Greed: Sentiment Turns Neutral As Bitcoin Stagnates, What To Do?

Blockchain-based fintech startup Figure to be acquired by Homebridge – PitchBook...

Fear And Greed: Sentiment Turns Neutral As Bitcoin Stagnates, What To...