If you love lottery tickets, Dogecoin (CRYPTO:DOGE) is right up your alley. Especially in recent months, the adorably puckish cryptocurrency is a dramedy of rocketship gains and cartoonishly steep losses. But its volatility and unpredictability mean that it isn’t a great investment for everyone.

The issue with Dogecoin as an investment is that its value isn’t anchored to any fundamentals. There are no landmarks like revenue by which the market could navigate toward a price. Instead, it’s driven by the capricious winds of trader sentiment, which is a nice way of saying hype. So, it’s actually quite easy to find a safer and less volatile place for your money to grow, and today, I’ll be discussing two of the many options that fit the bill. 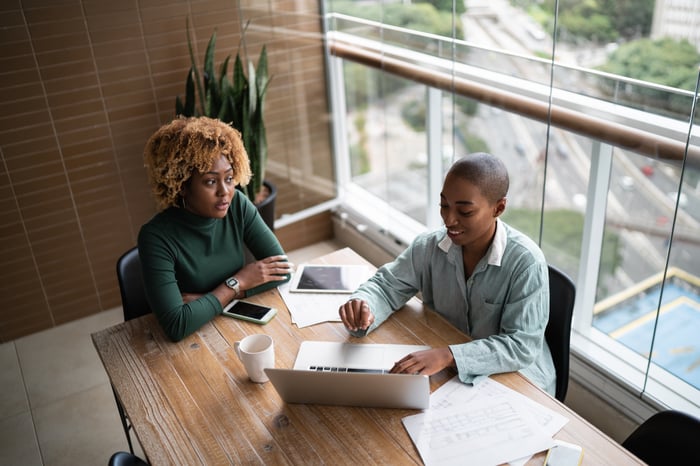 You might already be familiar with Novavax (NASDAQ:NVAX) thanks to its coronavirus vaccine program. Although the stock sank 25% after announcing a delay in that program, it’s still a better growth investment than Dogecoin. In short, Novavax is making things that people will need, and its vaccine technology is paving the way.

Unlike Dogecoin, Novavax’s value in the future will be higher than its value today, thanks to its revenue as well as its expected revenue growth. In the last 12 months, it made more than $919 million from development collaborations and vaccine preorders. That’s quite a chunk of change, but the company is just getting started.

If its coronavirus vaccine is actually approved by regulators, it’ll start making new sales and realizing (or refuting) the initial set of expectations about its future revenue. Revenue from vaccine sales will likely grow over time as Novavax increases its manufacturing capacity and signs new deals with buyers. At all times, the pace of its growth will be a goalpost that the market will use to find a price for the stock. As the company scales up its efforts, it should start to report profits. It could eventually use these profits to buy back its stock, thereby increasing the price directly.

Further into the future, maturing initiatives will start to deliver fresh sources of revenue. In particular, the commercialization of Novavax’s NanoFlu vaccine for seasonal influenza in older adults will be a major driver. At some point in the future, the company will likely combine NanoFlu and its coronavirus jab into one product, which will be quite a convenient product for healthcare systems to administer. Similarly, it could make another coronavirus vaccine jab to help deal with viral variants. Either way, I think Novavax is positioned to grow.

In short, Novavax is better than Dogecoin because there’s a clear roadmap for how its value will increase over time. Even if its efforts stumble, it can’t stumble so much that it becomes fundamentally disconnected from reality.

AbbVie (NYSE:ABBV) is a particularly appealing option for investors who like to see cash flows from their holdings. As a pharma giant with more than $50 billion in trailing revenue and $24.53 billion in earnings before interest, taxes, depreciation, and amortization (EBITDA), AbbVie’s portfolio of drugs delivers highly reliable income. That’s why it can afford to pay its shareholders a dividend that currently yields around 4.4%.

Needless to say, Dogecoin doesn’t pay a dividend. Nor does it have the insulation from volatility that a dividend can contribute to. Because AbbVie’s dividend payments come like clockwork every quarter and increase gradually over time, the market has an undeniable yardstick for its financial strength.

If its stock price were to drop as a result of a crash or a piece of bad news, its dividend payment would remain the same, thereby driving the yield upward. When the dividend yield spikes as a result of the price dropping with the dividend payment remaining constant, the stock becomes a much more attractive purchase for long-term holders, as they have the chance to lock in the higher yield without paying as much as before.

So, its price has a mechanism that can help it to recover faster. But a dividend also encourages investors to hold onto their shares during turbulence, making the prospect of a sharp drop less likely. Finally, AbbVie’s regular increases of its dividend payment mean that the people who hold it the longest end up getting the highest return. While some people might try to argue that Dogecoin’s return is also linked to holding it for a long time, most investors will probably find it much less stressful to buy AbbVie’s stock instead.

Bitcoin BTC Favored Over Ether ETH by CME Traders in 2023...