Dogecoin (CRYPTO:DOGE)might be one of the best-performing assets this year. However, with cryptocurrencies experiencing extreme volatility over the last few days, Dogecoin lost as much as 46% at one point, and is now down 19% since last week’s upheaval. Investors with a lower risk appetite may be better off avoiding cryptocurrencies due to uncertainty in the foreseeable future.

Instead of speculating on Dogecoin, investors should bet on growth stocks with multi-bagger potential and compelling fundamentals. Let’s explore why Roblox (NYSE:RBLX) and Virgin Galactic (NYSE:SPCE) fit the bill and could make great alternatives to the meme cryptocurrency. 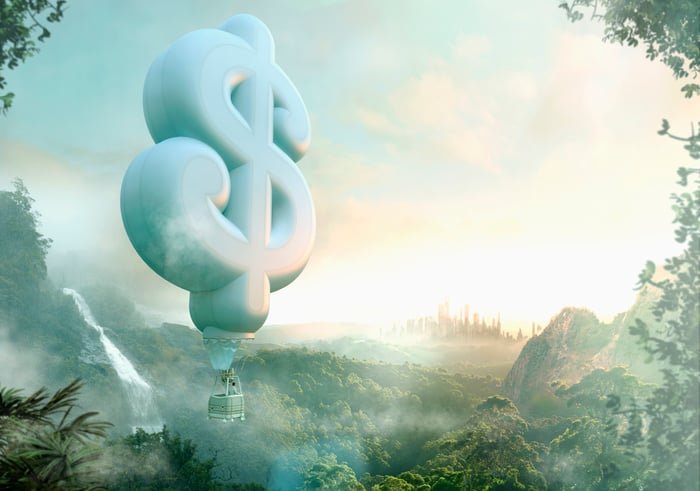 Roblox is a video game company with a revolutionary business model. Unlike rivals Activision Blizzard or Electronic Arts, it doesn’t develop and market game software. Instead, it operates a game creation engine that allows users to build their own games, which are monetized through an in-game currency called Robux. This strategy minimizes the company’s risk of investing in a flop and could supercharge growth by creating a limitless amount of original content.

Roblox’s first-quarter revenue surged by a jaw-dropping 140% year over year to $387 million. This even bettered its fourth quarter sales growth of 110%. Management will have to work harder to maintain momentum as coronavirus-related tailwinds fade away in the gaming industry. And to pull this off, they plan to expand internationally and into older age demographics.

Fifty-one percent of Roblox’s 42.1 million users are under age 13, but the older cohort is growing faster — up 110% compared to 60%. The company has also seen encouraging trends in China, where some developers have cracked the top 250 (more user growth could soon follow). With a price-to-sales (P/S) ratio of 44, Roblox will have to grow into its valuation. But with so many catalysts for continued expansion, that looks very achievable.

Space tourism is a virtually non-existent industry right now, but according to analysts at UBS, it could generate up to $3 billion annually by 2030. And even that projection pales in comparison to hypersonic travel, which could generate up to $20 billion by that time. Despite near-term challenges, Virgin Galactic is still one of the best ways to bet on both of these opportunities, giving it multi-bagger potential.

Virgin Galactic has been under pressure since an aborted test flight in December when an onboard computer failed to connect, leading the motor to shut off as part of the vehicle’s fail-safe mechanism. This setback has sent shares down by roughly 27% since the incident, but it doesn’t destroy the company’s long-term thesis.

According to the President of Space Missions and Safety, Michael P. Moses, the problem was caused by electromagnetic interference (EMI) from one of the vehicle’s systems. And to fix the issue, Virgin Galactic has added components to prevent and suppress EMI generation from the ship’s computers or wiring.

Management hasn’t provided word on when the next test flight will be, but the company plans to conduct two more flights before flying its founder Sir. Richard Branson to space, which could open the doors for commercial operation. With zero revenue and an unproven industry, Virgin Galactic has a binary risk/reward profile (either it succeeds or it doesn’t). But with $617 million in cash on its balance sheet compared to a cash burn of $50 million in the first quarter, the company has a substantial runway.

As cryptocurrency investors know, risk correlates with potential returns. Roblox and Virgin Galactic are safer bets than Dogecoin because they have fundamentals and real-world use cases. Roblox is likely safer because of its steady revenue and proven industry, while Virgin Galactic is ideal for those willing to tolerate more uncertainty for the potential for multi-bagger returns if things work out.

Bitcoin BTC Favored Over Ether ETH by CME Traders in 2023...