Avoid the Dogecoin Crash by Buying These 2 Growth Stocks Instead


If you want to send someone on a wild goose chase, send them to find a serious investor who’s willing to state on the record that Dogecoin (CRYPTO:DOGE) is a surefire long-term investment. Dogecoin may be fun to buy, but it’s unlikely be popular forever, and there’s next to zero intrinsic value propping up the cryptocurrency’s value. That means if you’re trying to plan for retirement or just hope to be wealthier five years from now, you’ll need to find a steadier investment.

If speculating on cryptocurrencies isn’t your style, investing in a diversified mix of growth stocks might do the trick. The pair of growth stocks that I’ll discuss today probably won’t go to the moon anytime soon, but they won’t lose their value overnight, either. 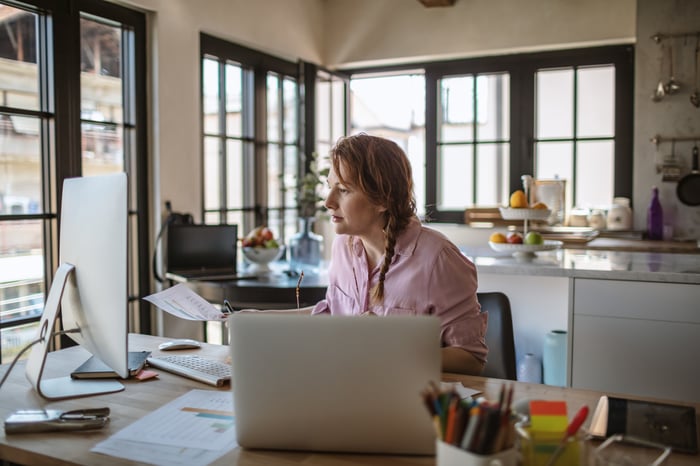 Abiomed (NASDAQ:ABMD) is a medical device company that manufactures Impella cardiac pumps, which keeps patients alive while their hearts recover from surgery. To put it bluntly, Abiomed is a valuable company because it makes unique and life-saving hardware. Still, the pandemic hit Abiomed quite hard, as non-essential surgeries were cancelled and hospital stays came at a premium.

Revenue was already experiencing a pullback in the fourth quarter of fiscal year 2020, and the pandemic compounded the drag from a weaker-than-expected year, which also bled into the next quarters. As a result, Abiomed’s total revenue only grew 1% from the 2020 fiscal year. That’s a sharp deceleration from the 9% total revenue growth in FY 2020, and an even larger departure from the 30% to 43% annual growth rates that the company enjoyed from 2016 to 2019.

But Abiomed’s fortunes are on track to return to their pre-pandemic norms. In the U.S., its fourth-quarter FY 2021 sales revenue reached just over $186 million, which is 13% more than the same period last year. Importantly, the company’s international footprint is growing even more rapidly. Year-over-year international sales of its pumps increased by 33% in the fourth quarter, reaching $44.3 million.

As the regular pace of hospital operations returns in the U.S. and abroad over the next year or so, investors can expect new revenue to start rolling in with gusto. Management is predicting total revenue to expand by up to 22%. To make that happen, Abiomed is working with regulators in the EU to get its Impella products approved for use in the same contexts as they are in the U.S. As of early March, regulators had given the green light for a key cardiac surgery technique using the Impella. In the long run, that’ll keep Abiomed’s international revenue on the right track and support its stock in the process.

Unlike Abiomed, CRISPR Therapeutics (NASDAQ:CRSP) is better than Dogecoin because it has a tremendous amount of future potential growth owing to its portfolio of advanced gene therapies for conditions like beta thalassemia and diabetes mellitus. Of course, for a biotech like CRISPR, investors will need to wait for quite some time before it starts reporting regular revenue, as its clinical projects are still immature and in development. But long before it makes money by selling its therapies directly, the company will reward its shareholders with a steady stream of updates from its ongoing clinical trials and preclinical research projects.

And that’s exactly what powered CRISPR’s stock through its rally of more than 90% in the last 12 months — and there’s likely more to come. Later this year, it’ll initiate a combined phase 1/2 clinical trial for a project that aims to treat type 1 diabetes. Eventually, a setback in the trial stages could prompt a dip in its stock, but until then, it’s full steam ahead.

Don’t take that to mean that the company’s value is based entirely on hopes about the future, though. Compared to Dogecoin, CRISPR’s future value is backed by a war chest of $1.81 billion in hard cash, and it has even more on the way. Thanks to its collaboration with Vertex Pharmaceuticals, it’ll be getting a dollop of $900 million under the terms of the pair’s newly revised agreement. In other words, even with recurring revenue distantly in the future and the wild uncertainty of the drug development process, CRISPR is such a prestigious partner that larger companies are willing to pay it hundreds of millions of dollars.

While big collaborations aren’t rare in the biotech industry, even industry veterans might balk at the sheer scale of investment into a pre-product company. For potential investors, the picture is clear: This company is going somewhere, and experienced competitors have faith in its capabilities.