The Chicago-based trading venue operator CME Group has no plans to launch a dogecoin futures product, The Block has confirmed.

“CHICAGO MERCANTILE EXCHANGE SAID TO LAUNCH DOGECOIN FUTURES,” read the tweet from @FirstSquawk, which aggregates breaking news headlines from the business world. An email sent to an address on its operator’s website regarding the source of the information was not returned by press time.

Still, several people familiar with the situation told The Block that no such product is being launched. CME, which has offered bitcoin futures since 2017, declined to comment.

Prior to The Block’s confirmation, sources within the institutional trading world balked at the tweet, noting that CME would have updated them on such a product.

“No one from CME had asked us about it,” one trading executive said. “Usually they give us a look.”

First Squawk was among a range of Twitter accounts that signal boosted a still-unsubstantiated headline over the weekend that read “U.S. TREASURY TO CHARGE SEVERAL FINANCIAL INSTITUTIONS FOR MONEY LAUNDERING USING CRYPTOCURRENCIES.” Some market observers have drawn a connection between the spread of the headline and this weekend’s market plunge and cascade of futures liquidations.

Dogecoin has been on a tear over the last several trading session, sporting a market cap above $40 billion, and the meme-themed cryptocurrency has been evangelized by billionaires investors such as Elon Musk and Mark Cuban. Robinhood said Friday that dogecoin-related activity on its platform triggered a temporary interruption.

Dogecoin surged during Sunday’s trading session, but the price has since slipped, trading down 3.12% according to TradingView data. 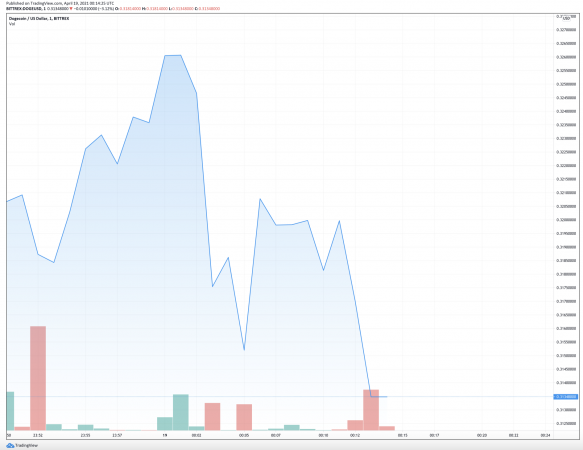 Previous articleYes, Front-Running Will Still Exist on Ethereum 2.0
Next articleCalvin Ayre on The Early Stage Investor: Why Bitcoin SV is the most valuable blockchain network