Meme cryptocurrency Dogecoin (DOGE) has run up nearly 80% in a 24-hour period and is trading above the psychologically important 10 cent mark.

The Shiba Inu-themed cryptocurrency crossed the 10-cent barrier on Tuesday and touched a new all-time high of $0.138 a quarter of an hour before press-time on Wednesday.

For the year, DOGE has soared a spectacular 2,556.81%, outshining gains of the apex cryptocurrency Bitcoin (BTC) which is up 120.23% in the same period.

Mark Cuban, the owner of Dallas Mavericks, disclosed on Twitter on Tuesday that sales of the basketball team denominated in DOGE rose 550% over the past month. Cuban also promised not to sell even a single DOGE.

FYI, the Mavs sales in @dogecoin have increased 550pct over the past month. We have now sold more than 122k Doge in merchandise ! We will never sell 1 single Doge ever. So keep buying @dallasmavsshop https://t.co/li32cdtcED

In a separate tweet, Yang recalled, “hearing about [DOGE] hitting a penny.”

Restaurateur and author Guy Fieri also had his say on the joke cryptocurrency.

Rollin’ out to the MOON  #Dogecoin pic.twitter.com/OHwuihdlUD

Why It Matters: Cuban had said last month that DOGE to $1 “will definitely” happen if Mavericks fans keep up the momentum of transactions.

Still, DOGE gained plenty of traction on social media and emerged for a while as the top trending hashtag on Twitter. At press time #Dogecoin maintained its lead.

The Reddit crowd also showed exuberance at DOGE’s surge and there was no shortage of memes on r/Dogecoin. 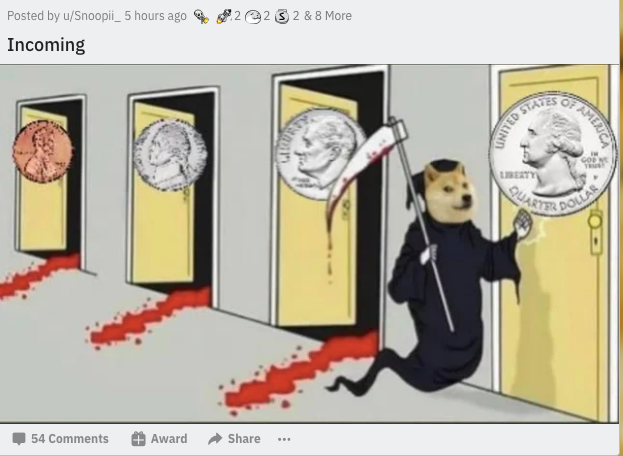 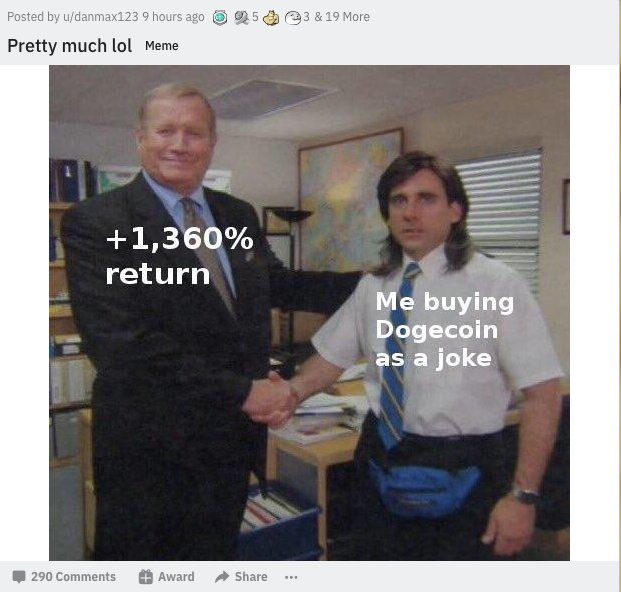 DOGE was the top trending ticker among the 10 most trending tickers as compiled by Stocktwits.com. The second in place was the cryptocurrency Cardano (ADA).  ADA rose 17.21% to $1.52 at press time.

Benzinga’s Take: On its apparent face, the latest Dogecoin rally seems driven by the “Doge Army” overall — not much different than the short squeeze in the stock of GameStop Corp. (NYSE:GME). Musk last tweeted about Dogecoin last weekend and Cuban’s came in the aftermath of the rally. Unlike the past few rallies, the celebrity influence seems limited.

Read Next: Bitcoin Continues To Lose Grip Over The Crypto Market Despite Surging To Record Highs