Moonshot meme plays like GameStop and Dogecoin can be entertaining, but their valuations are far removed from reality. Investors who want to punch their tickets to the moon are better off with companies that are pioneering the next generation of space technologies.

We asked some of our contributors which space companies they thought were good buys now. They chose Momentus, which plans to merge with the SPAC Stable Road Acquisition (NASDAQ:SRAC); Trimble (NASDAQ:TRMB); and Lockheed Martin (NYSE:LMT). 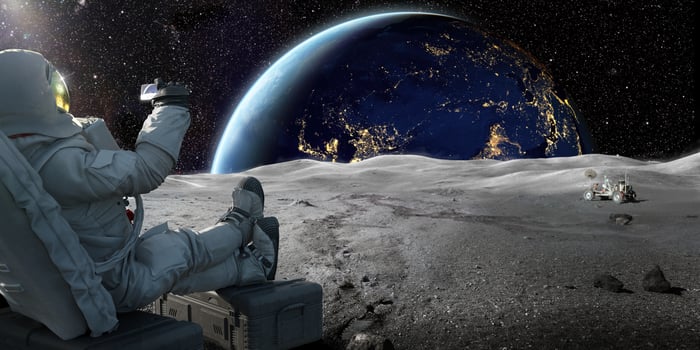 Scott Levine (Momentus): Interest in GameStop and Dogecoin may be sky-high, but Momentus is a company that’s actually reaching for the stars. Branding itself as a “first mover in offering in-space transportation and infrastructure services,” Momentus is a key player in the burgeoning space economy.

Besides partnering with SpaceX in 2020 to bring satellites into orbit, Momentus is working with Lockheed Martin with regards to NASA’s Artemis program, which aims to return humans to the Moon by 2024. Last October, Lockheed Martin announced that it had received $89.7 million from NASA for testing cryogenic fluid management technologies, and it will enlist the help of Momentus and its Vigoride platform to assist in the management of the cryogenic fluid. Looking further into the future, Momentus recognizes the opportunity for its space infrastructure services to be used in support of companies conducting asteroid- and moon-mining operations.

While its mission to the moon is still some years away, the company currently offers a solution, via its Vigoride platform, for customers who have a present need to deploy satellites. According to Momentus, the value proposition of its Vigoride platform is considerable. In a recent investor presentation, for example, Momentus noted that a traditional satellite deployment that’s accomplished through a dedicated small rocket launch can cost in excess of $70,000 per kilogram; however, customers who opt to rideshare on a large rocket and employ the Vigoride transfer vehicle for reaching the satellite’s final orbit can reduce that cost to $15,000 per kilogram. And the cost savings extend even further. Whereas customers can incur annual costs of about $10 million by using a traditional satellite platform, Momentus estimates it can provide similar services for less than $1 million per year.

While the SPAC acquiring Momentus is currently an extremely speculative stock, investors can monitor how well Momentus fares in converting the $90 million in potential revenue it has in its backlog to actual sales; moreover, they can see how the company does in generating sales from the approximate $230 million in proposals that it has submitted.

Position yourself to make money with Trimble

Lee Samaha (Trimble): The top holding in Cathie Wood’s ARK Space Exploration and Innovation ETF (NYSEMKT:ARKX), Trimble is a company revolutionizing how industries such as construction, agriculture, and utilities operate. Using the company’s products and services, customers can utilize data from satellites to better position and model activity.

For real-world examples of the technology in action, consider that a highly detailed construction project — such as a bridge or an airport — can be prepared and built with pinpoint accuracy against the original model. The improvements in accuracy could generate many millions of dollars in savings from avoiding project-cost overruns, or delivering a power plant in good time for an operator.

Similarly, as investors in Deere & Co. already know, precision agriculture can revolutionize how farmers manage everything from soil preparation through seeding and nurturing and ultimately harvesting. Meanwhile, transportation companies can generate significant productivity enhancements by tracking and optimizing fleet operations.

Simply put, Trimble has many pathways to growth in the coming years, as the combination of an increase in high-powered data analytics and greater customer awareness will create demand for its solutions.

Now trading at 33 times its estimated earnings for 2021, Trimble isn’t a superficially cheap stock. However, its long-term prospects look assured, and quality growth stocks rarely come cheap. Wall Street analysts see Trimble’s net income growing from around $380 million in 2021 to approximately $540 million in 2023, for an increase of over 40%.

Look at a safe way to invest in space

Daniel Foelber (Lockheed Martin): Since launching the ARK Space Exploration and Innovation ETF last Tuesday, Cathie Wood now owns shares of Lockheed Martin in two of her six actively managed ETFs. Lockheed may not have the 8.6% weight of Trimble, but it comprises a respectable 4.4% as the eighth-largest holding in the new space ETF.

Space is one of Lockheed’s four key business segments. With just shy of $12 billion in 2020 revenue and $1.15 billion in operating profit, the division is bigger than most companies. As Scott Levine mentioned above, Lockheed is working on the Artemis I Orion spacecraft. In addition to landing the biggest NASA 2020 Tipping Point Selection to develop liquid hydrogen — for more money than even SpaceX — Lockheed acts as the primary contractor for Orion’s crew module, crew module adaptor, and launch abort system. More recently, Lockheed constructed the aeroshell (heat shield and back shell) for the Mars 2020 mission. The shield protected NASA’s Perseverance rover as it landed on Mars’ Jezero Crater on Feb. 18.

These projects are impressive, but the reality is that most of Lockheed’s space business is involved with government satellite programs and hypersonic missile developments. Satellite products and services range from military defense systems to developing 5G technologies. In January, Lockheed landed a $4.9 billion contract to develop three Overhead Persistent Infrared (OPIR) missile warning systems. However, it expects 2021 revenue to increase in the low single digits, and operating profit to decrease in the low single digits, from 2020 levels.

Although space has the lowest operating margin of Lockheed’s segments, it still turned nearly 10 cents of every dollar of 2020 revenue into profit. With a $25.1 billion backlog and plenty of programs still in the early stages, management pinpoints space as the company’s primary growth driver in the coming years. Lockheed Martin generates reliable revenue from contracts with the U.S. government and its allies, which gives it ample inflows to fund long-term space projects. With a price-to-earnings ratio of just 15.2 and a current dividend yield of 2.8%, Lockheed is one of the most well-rounded ways to invest in space right now.

Previous articleDogecoin Surges 10 Per Cent After Elon Musk Tweets That SpaceX Is Going To Put Memecoin On Moon
Next articleElon Musk Wants to Put a ‘Literal’ Dogecoin on the Moon, Humans May Have to Wait