The ability of DOGE/USD to trade within a range which only saw a value change of about 20% in March may produce speculative optimism.

Volatility within DOGE/USD has dropped in the past month of trading. Yes, the cryptocurrency still managed to achieve a value change of 20%, but compared to the end of January and month of February the March trading results were positively calm. Speculators within cryptocurrencies tend to be attracted to volatility, but they do not enjoy seeing their entire account wiped out in a moment’s notice. The sudden rather tranquil trading ground of DOGE/USD offers the opportunity to actually monitor its price fluctuations in a relatively calm manner.

A high of nearly six and three/tenths cents was touched on the 14th of March. Following this move higher, a reversal towards five and half cents was seen the next day. Again twenty percent value changes are considered huge in all assets, but DOGE/USD is trading within a sphere that is highly volatile and one that is measured often in tenths of a cent. The five and half cents ratio has been a catalyst for Dogecoin the past couple of weeks. A range between five and two/tenths and five and six/tenths cents has been the dominant theme.

Traders within DOGE/USD should also technically pay attention to the sentiment being generated in the broad cryptocurrency market. The past ten days saw reversals lower, followed by trends upwards in most major cryptocurrencies and heading into April. However, DOGE/USD is still below the majority of its value range it was able to attain in March, which may open the possibility towards speculative wagering Dogecoin can climb ‘slightly’ higher.  A one month chart suggests DOGE/USD may have found some temporary equilibrium.

The world ‘slightly’ is not used by mistake. Traders need to remember DOGE/USD trades in fractions of a cent.   Simple moves of two/tenths of a cent can make or break the results for speculators based on the use of take profit and stop loss orders. Leverage must be carefully managed and trading results should be expected to provide rather quick short term outcomes. Looking for larger moves in Dogecoin means a speculator needs to be conservative regarding their risk taking tactics. DOGE/USD has proven the past month that support levels have been rather adequate and using the five and three/tenths cents as guidepost could prove important as a barometer.

If DOGE/USD is able to sustain its value above the five and half cent ratio for a few days in a row it may indicate more speculative buying may ensue.  DOGE/USD may best be traded using momentum, meaning that a position is opened using a limit order that looks to take advantage of the direction of the current short term trend. DOGE/USD is a speculative asset and the month of April may prove to be solid for the cryptocurrency if the broad digital market produces gains too.

Speculative price range for DOGE/USD is between four and half cents to six and a half cents.

Importantly DOGE/USD was able to establish technical stability in the month of March and traders will use its range as a point of reference. The five cents mark has proven durable as support, if the 0.04950000 level is broken it could spell a drive lower with a test of 0.04700000 as a focus.

If speculative sentiment remains high DOGE/USD will have the capability to move higher. Resistance near 0.05700000 has proven durable, if this mark proves vulnerable a retest of the six cents level could be demonstrated swiftly.  A high mark of 0.06400000 could prove tough to attain, but if buying finds additional push the value may be accomplished in April. 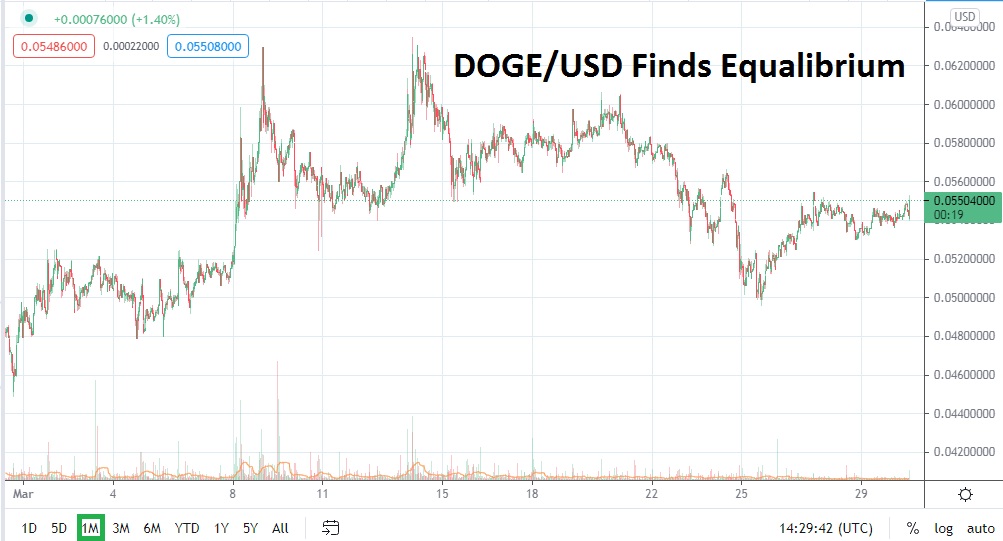