Dogecoin Remains at Best an Alt Cryptocurrency After Bitcoin and Ethereum

Dogecoin (CCC:DOGE-USD) is down this week along with other cryptocurrencies like Bitcoin (CCC:BTC-USD) and Ethereum (CCC:ETC-USD). This underlines its inherent weakness. It will likely always be an “alt” or alternative cryptocurrency after the two major cryptos, Bitcoin and Ethereum.

As such, it is likely to have a much wilder ride and higher volatility than these other two cryptos. One reason for this is because Dogecoin is presently ranked as the 14th largest crypto in terms of market cap.

For example, Coinmarketcap.com reports that Dogecoin has a market capitalization of $5.784 billion as of Feb. 23. This compares with $873.7 billion for Bitcoin and $172.3 billion for Ethereum.

Market capitalization for a cryptocurrency is the total number of coins mined and available (not necessarily in circulation) times the most recent price. In other words, Dogecoin is 0.66% of the size of Bitcoin and 3.36% of the size of Ethereum.

If almost half of a security’s market value is trading during one day, its price is going to be much more volatile. It will also have a wider range than otherwise.

I previously pointed out that Dogecoin has an inflationary controlled supply. It releases 5 billion Dogecoins each year through mining. This can go on forever.

By contrast, Bitcoin has a deflationary supply structure. There are only 21 million Bitcoins that can ever be mined. Right now, according to Coinmarketcap, for example, 18.36 million of these have already been mined and someone owns each one of them.

This means that less than 2.64 million Bitcoins can be mined or earned as a reward from mining. This is only 12.57% of its total supply. That tends to make the cryptocurrency subject to hoarding. This will ensure that the price will tend to rise over time. But it also means that the hoarding effect will limit the crypto’s use as a currency for blockchain transactions.

By contrast, Ethereum has no limit on either its supply or the number of coins that can be mined over time. That will allow it to have more use as a cryptocurrency for transactions. But it will also, over time, have a limited effect on its ability to be hoarded. 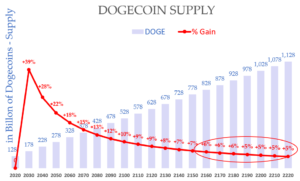 Dogecoin stands somewhere in the middle of these. As you can see in the chart on the right (also in my previous article), the supply will fall over time.

Over the next decade or so the supply growth slows down to between 2% and 3%. This means that the inflation rate of the supply will trend down slowly and predictably.

This gives Dogecoin the ability to be used as a cryptocurrency since its supply is growing. Yet it can still be hoarded since the supply growth rate slows over time.

What To Do With Dogecoin

The astute investor in cryptocurrencies will likely want to diversify their holdings to include more than just Bitcoin and Ethereum. Dogecoin is an excellent choice as an alt cryptocurrency.

For one, its higher volatility implies that on the upside it could potentially have much more potential profitable gains possibilities than either Bitcoin or Ethereum. Of course, this works on the downside as well.

In addition, it seems to offer the best of both worlds, in terms of usability in blockchain transactions and also its ability to allow for hoarding effects.

However, one huge downside for Dogecoin has been pointed out by the Wall Street Journal. On Feb. 17 they reported one individual owns as much as 28% of the total supply of Dogecoins. The person’s name is not known, but at the time the stake was worth $2.1 billion (likely 15% or lower by now).

The WSJ also said it could be owned by an exchange or a group of people. The article goes on the muse that it is possible that the account owner might be Elon Musk. He has, at times, promoted Dogecoin, but recently seems to have encouraged people to sell it. This is all very strange.

Therefore, most people who are considering investing in Dogecoin will do it only as a diversified position among other crypto coins.

On the date of publication, Mark R. Hake holds a long position in Ethereum and Bitcoin.

Mark Hake writes about personal finance on mrhake.medium.com and runs the Total Yield Value Guide which you can review here.

The post Dogecoin Remains at Best an Alt Cryptocurrency After Bitcoin and Ethereum appeared first on InvestorPlace.

Will this Coin Be The Ethereum (ETH) and Ripple (XRP) Killer?...

This Little Known DeFi Token Is Attracting Investors – Find Out...