DOGE/USD has come under pressure the past week of trading and important support levels are now within sight for speculators.

After reaching a high above the five-and-a-half cents value yesterday, DOGE/USD has taken a tumble along with the broad cryptocurrency market. DOGE/USD, as of this writing, is hovering above important support levels near five-and-one/tenth cents and if its value stumbles and the five-cent mark is challenged, it could sound alarm bells for speculators and create another dose of volatility.

On the 20th of March, DOGE/USD was near the six cents juncture, and on the 13th of March, Dogecoin was near the six-and-three/tenths cents mark. The loss of value within DOGE/USD may have proven an opportunity for speculators who believed it has been overvalued. However, DOGE/USD has also offered a steady diet of reversals higher. However, if the current support levels prove vulnerable and the broad cryptocurrency market remains under pressure short term, speculators may believe DOGE/USD could traverse lower.

A look at a three-month chart technically explains the volatility of DOGE/USD quite well. Dogecoin was trading below one cent on the 27th of January before it started to explode higher. The sudden run higher culminated with prices above eight cents on the 7th and 8th of February, but since then sustaining higher values has proven difficult.

The current price of DOGE/USD is near values seen on the 7th of March, and if the five-and-one/tenth cents value fails to hold, traders may suspect the four-and-eight/tenths cents juncture will become the next target technically. Dogecoin is a speculative asset and traders should be using risk management when they pursue their wagers.

The recent sell-off seen in the broad cryptocurrency market may be a signal that DOGE/USD will continue to prove vulnerable. Short-term traders should look for selling opportunities on small rises in value. If DOGE/USD cannot puncture the five-and-two/tenths cents resistance level near term, this may signal an additional sell-off will be demonstrated.

.Selling DOGE/USD should be done with limit and take-profit orders that are fully working within your trading platform. Dogecoin and other cryptocurrencies appear ready to deliver plenty of additional volatility short term and risk-takers should be prepared for swift price action. 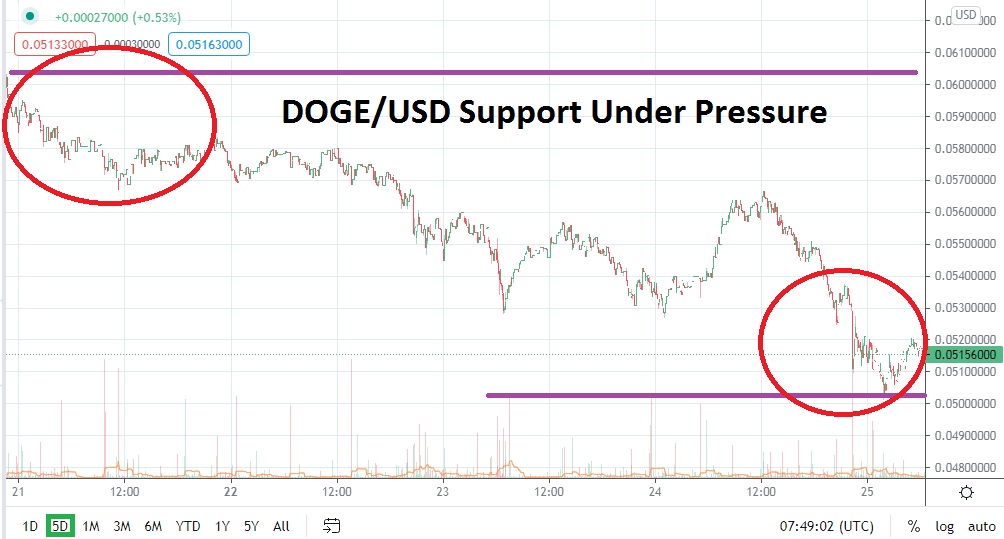