Dogecoin Mega-Whale? Elon Musk Thinks It Could Be Robinhood

What Happened: Musk was responding to a comment on Twitter Inc’s (NASDAQ:TWTR) platform which explored the possibility of Robinhood being the Dogecoin “top whale.”

Musk expressed agreement with a Tweet that called for “transparency” from the trading app. The tweet also touched on his grilling of the Robinhood CEO Vladimir Tenev.

Why It Matters: Musk this week asked major DOGE investors to “sell most of their coins,” saying “too much concentration” of the cryptocurrency in few hands was the primary hiccup to wide adoption.

The entrepreneur has previously dubbed DOGE as “people’s crypto” and pitched for its mass adoption.

There is increased social media speculation that Robinhood is the Dogecoin Whale, DH5.

DH5 is a reference to a Dogecoin address that has over 36.8 billion DOGE in balance, which makes up for 28.6% of all circulating supply of the cryptocurrency. 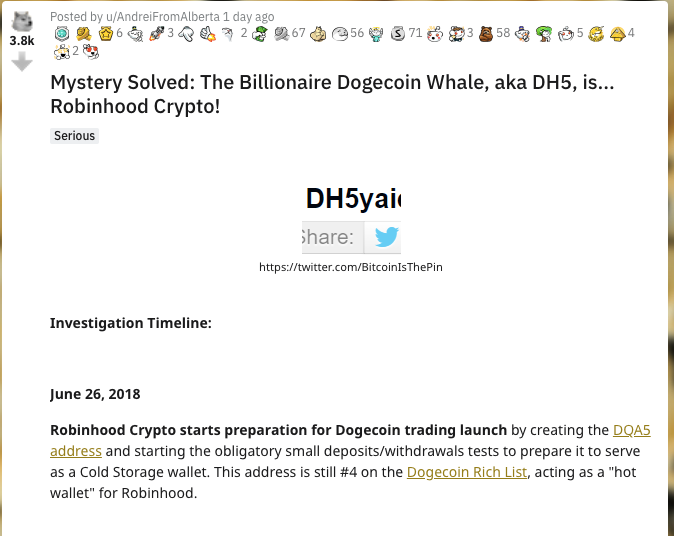 Previous articleDogecoin Price Analysis: DOGE bulls light up the chamber for a 35% move
Next articleElon Musk Is Creating a City in Texas. It Will Be Called Starbase and It Will Be Ruled by ‘The Doge’