Elon Musk is known for a few things in this world. Depending on the value of Tesla’s stock, he sometimes holds the title of ‘world’s richest person’; he is also known as the Founder of the company that made electric cars ‘sexy’. However, in 2021 Musk has added another title to his resumé: DogeCoin (DOGE) CEO.

Ok, he was joking. All the same, though, Elon Musk seems to have developed a bit of an obsession with DogeCoin. The latest examples of this fixation took place over the weekend when Musk posted several DOGE-related tweets.

In one instance, Twitter user @itsALLrisky asked Musk if he would be in favor of a Coinbase listing of DogeCoin. “Hi Elon, I saw a report that Coinbase was used for the Tesla BTC purchase (nice entry btw). Do you think Coinbase should enable dogecoin on their platform? It would enable many folks to easily access DOGE.” Musk simply responded, “Yes!”

“Why Are You So Dogematic, They Ask.”

Musk’s personal Twitter page was lit up with DOGE-related tweets on Sunday.

“Doge day afternoon,” he wrote, along with an “origin” story: “Origin of Doge Day Afternoon: The ancient Romans sacrificed a Dogecoin at the beginning of the Doge Days to appease the rage of Sirius, believing that the star was the cause of the hot, sultry weather.”

Origin of Doge Day Afternoon:
The ancient Romans sacrificed a Dogecoin at the beginning of the Doge Days to appease the rage of Sirius, believing that the star was the cause of the hot, sultry weather.

“Ah, you’re a man of culture as well,” wrote user @itsALLRisky in reply. “The Dogan War is a classic.”

“Why are you so dogematic, they ask,” Musk wrote in a separate tweet.

Additionally, he wrote that: “I’m getting a Shiba Inu #resistanceisfutile.”

I’m getting a Shiba Inu #resistanceisfutile

Show Your Trading Talent on Trader’s Arena 2021Go to article >>

Historically, Musk’s Attention on DOGE Has Had Major Effects on DogeCoin Markets

Interestingly, Musk’s DOGE-related tweets did not seem to have much of an effect on the price of DogeCoin, which has steadily declined over the course of the last 24 hours. 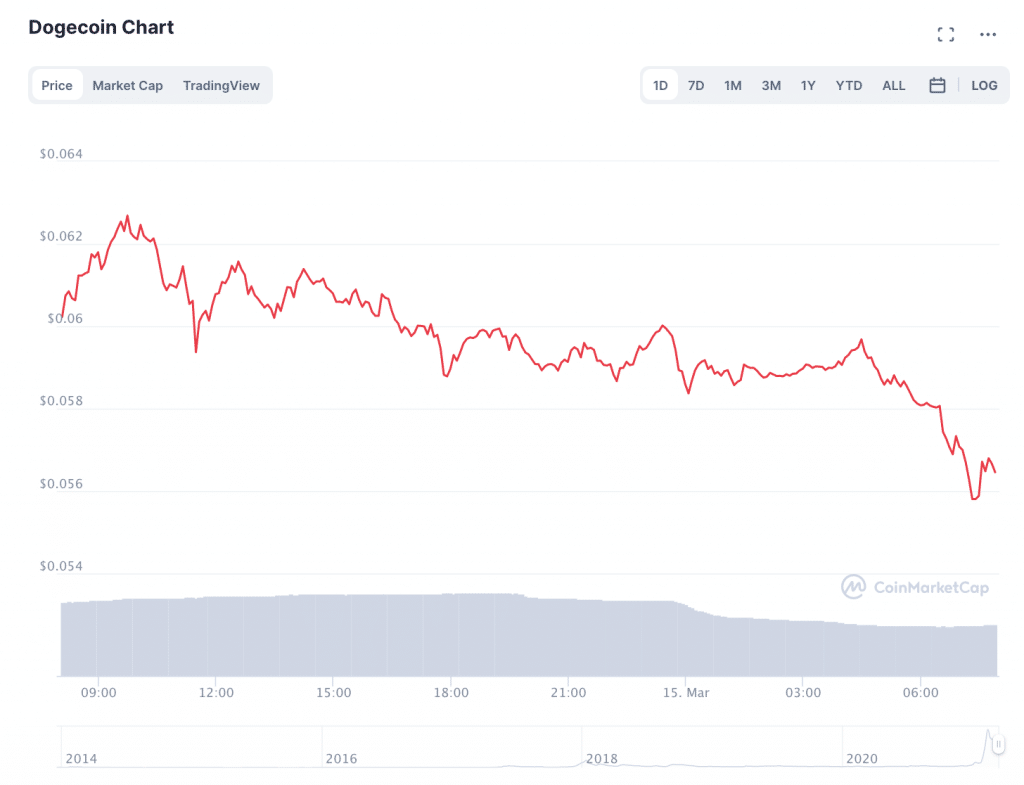 Historically, this has not been the way of things. Throughout the month of February, the price of DOGE would leap as Musk tweeted about it: memes of himself as Rafiki from the Lion King holding up a Shiba-Inu Simba to the sun; and an ‘instructional’ video about DogeCoin, and offers to buy out DogeCoin whales.

Each time Musk would do this, even if he was making a joke about DogeCoin, the price of DOGE would spike. For example, following a flurry of DOGE-related tweets on February 7th, a number of analysts pointed to Musk as the causative factor behind a 40% DOGE price jump within the following 24-hour period.

Elon musk tweeted about Doge coin, and in less than an hour it has rose in value at about 50%. He’s Unarguably the Biggest influencer in the world.

How Serious Is This?

It has never been totally clear how serious Musk is about DogeCoin.

At one point, Musk commented during a conversation on social networking app, Clubhouse that: “I occasionally make jokes about Dogecoin, but that is because Doge was made to make fun of crypto assets. The most ironic outcome would be that Dogecoin becomes the currency of earth in the future.”

However, not everyone is happy that Musk has been shining such a big light on DOGE.

A user on the r/Cryptocurrency Reddit page, u/Jones9319, said that: “this doge situation is seriously damaging to crypto.”

“Elon Musk literally tweeting ‘Doge’, and it skyrocketing the way it has is just giving more reasons for governments to take legal action against crypto,” u/Jones9319 wrote.

“So many will lose money from this and any credibility Elon Musk has about crypto will be gone. The whole doge thing is funny, sure, but I’m not sure we want mainstream media using it to define crypto as a literal joke.”