Dogecoin has been a matter of discussion and controversy on the internet. And it has garnered a lot of attention in the past few months. And if I might say all this has to do with the tweets of Elon Musk. Every time he tweets about it, the currency’s price moves up due to the mass buying that happens consequently. His tweets have influenced many to invest in Dogecoin. And many are so influenced that a petition for Amazon to start accepting Dogecoin now has over 100,000 signatures. Check out Elon’s most recent tweet regarding Dogecoin: 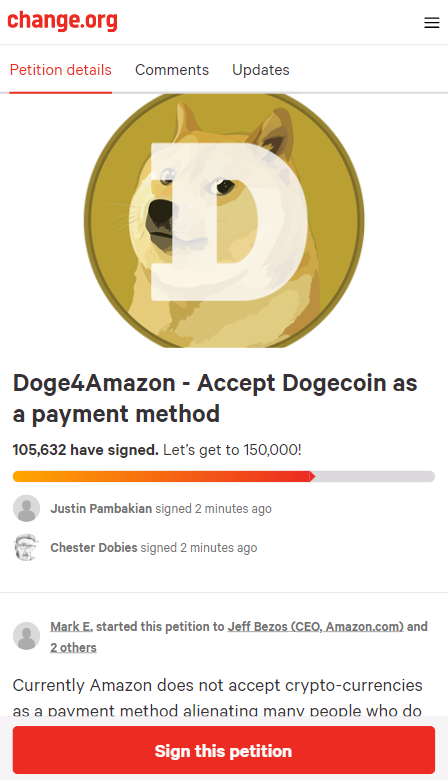 The petition I am talking about is not new. It has been many years since the petition was released, but back then, most people didn’t know about Dogecoin. And so obviously, the petition didn’t reach the required signatures to bring it into effect. But after all this time, the same Dogecoin petition has got some fresh attention from the masses. The campaign has gone big, and many people are now signing it.

When the petition was launched, the vision of the user was great. He wrote that Amazon doesn’t accept any form of cryptocurrency as payment. So, it makes it difficult for people who do not have a traditional bank account to buy things. So, it’s important Amazon being one of the major companies, comes forward and takes reign to unleash the power of crypto. The user did have the idea that cryptocurrency was the future. And as in 2021 we already see things are changing.

Comments of Redditors on the petition

There were both positive and negative sentiments towards the petition. Many believe that it will show Amazon that over 100,000 users are waiting for them to start accepting Dogecoin. And so they could actually take it up and integrate the support on their e-commerce site. While on the other hand, many believe that Amazon accepting Dogecoin is actually not in its best interests. Instead of wasting so much time and energy urging Amazon to start accepting Dogecoin, a user said it would have been better if Coinbase was asked to do so. It would have been a more practical petition and might have actually materialized.

At the same time, MarkE, who actually started the petition, said that he is thrilled to see that it is gaining so much attraction. When he started it, the idea was to promote Dogecoin and see its adoption. And it is not just for the big companies but the small business too. He said that he is going to keep the petition open and try to boost further adoption of Dogecoin. 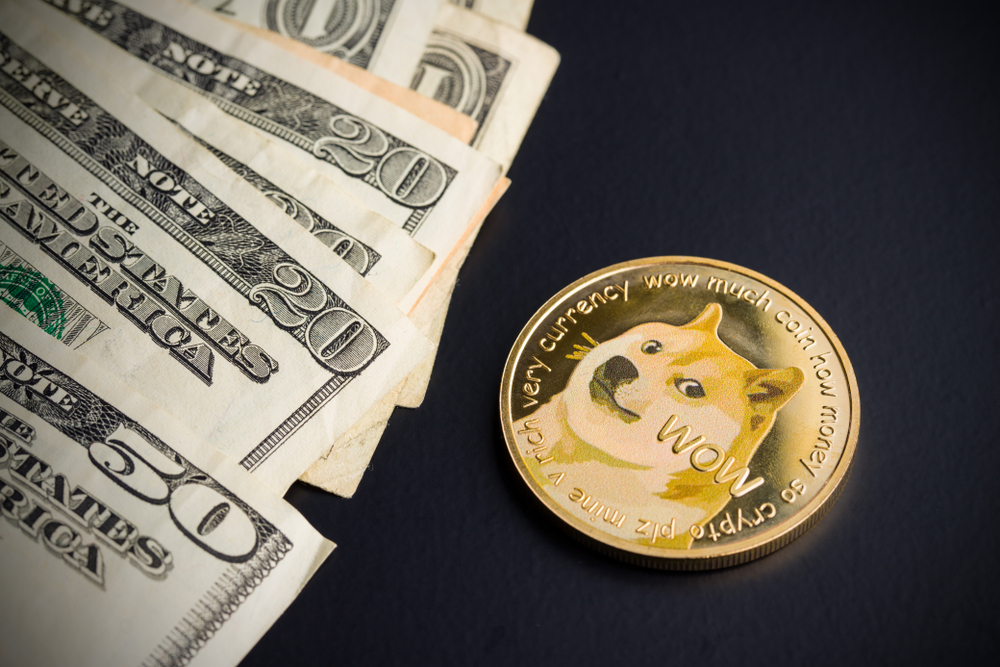 Dogecoin was created as a meme to mock cryptocurrencies. It had the face of the famous meme dog called Shiba Inu dog, which was a viral meme back then and is loved even now. But all these years, no one knew about the cryptocurrency, and it was sitting silent among other altcoins whose value has increased drastically. But in 2021, things changed for Dogecoin; as Reddit users started pouring money into the meme stock, it drove up the price. At the same time, the repeated tweets by Elon Musk regarding the cryptocurrency also fueled short rallies that increased the price of the coin by more than 5 times in the last 2 months.

Where can you spend your Dogecoin if not Amazon?

Well, as of now, Amazon has not started accepting Dogecoin, and neither has any other major e-commerce site. So, you must be wondering where you can spend the Dogecoin you own. The use of Dogecoin as a payment method is already picking up pace. With its fast operating blockchain and low price, it is accessible and usable at the same time. It also has a smaller transaction fee as compared to other cryptocurrencies. As of now, there are many restaurants, travel agencies, web services, and obviously video game retailers that accept bitcoin.

On the other hand, it is also being used for tipping on social media platforms like Reddit and Twitter. This is increasing the use of the cryptocurrency and making the people receiving the coins hold it and wait till its value increases. If you are in the market for any product or service, here are some places you could get it by paying with Dogecoin.

It is a restaurant as you can understand by the name. Located in Maryland, it allows its customers to pay their bills using Dogecoin. It has become a go-to place for enthusiasts and was also the first well-known restaurant to start accepting cryptocurrency.

If you want to get some web hosting services for your site, then AllGamer is the place to go. It offers users the option to pay using Dogecoin, and at the same time, the prices of its services are not very high.

Planning a vacation? But you don’t have dollars? No issue! You can pay for your flight and hotel services using Dogecoin on Travala.com. At the same time, the site has much other cryptocurrency support, too, so that’s an added bonus.

Dogecoin also has gamers covered as they can now purchase their favorite game using cryptocurrency. Not all sites have the option to do so, but a site that does is NinjaGameKeys.

Elon Musk is one of the only prominent individuals who has always shown his support for the meme cryptocurrency. He has repeatedly tweeted about it and has sent the price of the cryptocurrency booming. His recent tweets have even sparked conflict between him and the SEC, but who stops the world’s richest person when he is just sharing memes. When the SEC said that they would be investigating Elon Musk for his tweets on Dogecoin, he said that he would like that.

It is also not the first time when the SEC has taken a shot at Elon Musk. A few years back when Elon made a joke about taking Tesla private it was fined hugely for the same. Therefore, we can understand where this attitude comes from. Elon even tweeted about Dogecoin on 1st March after all this happened and boosted its by another 10%. His tweets like “Dogecoin is the people’s crypto” and “No highs, no lows, only Doge” have sent him and Dogecoin trending on platforms like Reddit and Twitter. At the same time, Elon didn’t even mind posting memes about him. He went out of his way just to make people laugh and talk about Dogecoin, as you can see from this tweet.

Elon Musk even said that since Dogecoin was made as a meme, it would be awesome that the meme coin becomes the planet’s currency. In 2021, the price of Dogecoin has already increased by more than 800%. Even though the trend of “To the moon!” has subsided a bit in the last few weeks but when it did go viral, it was everywhere. Heck, even there was a Superbowl commercial made on Dogecoin, and it went really viral on Twitter.

The problem with Dogecoin

Even though there are so many supporters and investors in Bitcoin, one must be wondering why the price of Dogecoin is so less. Well, by market volume, it has the most number of coins, and by market cap, it’s just around $6.5 billion. When the meme cryptocurrency was made, it was not programmed to be less supply high demand. In fact, there is so much supply that the price of Dogecoin is very difficult to push. This is why even after repeated tweets about Dogecoin, the prices go up for a while and then come back as profit-taking happens.

At present, Dogecoin is sitting at number 14, just below USD coin in the top cryptocurrencies list. And when the cryptocurrency was at its peak, it surpassed many other altcoins and reached no 9 positions. Even the makers of Dogecoin said that they were astonished too when they say that the price of Bitcoin has been rising crazily. They themselves said that it was not meant to be this way.

Have you invested in Dogecoin, and if yes, how much? And do you think that Dogecoin has any chance to see mass recognition in the coming months or years? Let us know in the comments below. Also, if you found our content informative, do like it and share it with your friends.

Also Read: India has launched Brazil’s Amazonia-1 and 18 other satellites into orbit