Dogecoin is a cryptocurrency that many investors found hard to take seriously when it first emerged. However, inspired by an internet meme, the digital coin has quickly improved to become a profitable investment choice for crypto traders.

In this guide, we will assess whether it’s possible to make a profit from DOGE, especially in the long run, till 2030.

To properly predict the price of Dogecoin in the future, it’s best to look at its history.

In December 2013, Dogecoin emerged with a market cap of $3.5 million and each coin costing $0.0006. Almost immediately, its value doubled, and it experienced an upward price movement.

After enjoying a great first year, DOGE didn’t do so well from 2014 to 2015 as the market’s attention shifted to newly debuted coins, including Stellar and Monero; the price became $0.0001.

Although it had a bad patch, DOGE quickly recovered in 2016. In June 2017, as the entire cryptocurrency market rose, so did Dogecoin, and it reached a record level of $0.003575. It recorded another new high in January 2018, reaching $0.018773. When Elon Musk endorsed the cryptocurrency in 2019, the price increased again.

DOGE became 44th on the list of currencies by market cap, with its capitalization set at $575,315,664. However, once 2021 began, Dogecoin surprised the entire crypto community by taking the lead over other altcoins in terms of gains as it went above 1 cent per token. It was also endorsed by Angela White, an Australian adult film star, leading to an immediate 125% increase in its value.

When looking at the Dogecoin price prediction 2030, one must consider the price chart and analysis of the cryptocurrency. As is evident from the price history above, the currency has experienced more highs than lows, has a vibrant community, and a relatively stable value.

It’s expected that Dogecoin will do better than other peer altcoins by 2030 because of its previous activities and capability. There are even partnerships and integrations expected before that time, which will lead to wider user adoption. Thus, the price prediction estimates that Dogecoin will get to $0.2 by 2030.

Will Dogecoin Get to $1?

According to many previous predictions, Dogecoin was expected to get to $0.01 by the end of 2021. However, it shocked the market by leading the altcoins and achieving this feat in the first week of the year instead. So, does this massive price increase mean that it’s going to keep on going and get to $1 very quickly?

Dogecoin won’t achieve massive value like Bitcoin now. Bitcoin has a hard cap of 21 million, which means that as time goes on, the supply will reduce, demand will increase, and so will its price.

On the other hand, Dogecoin has no hard cap, and there are billions of DOGE out there. Because of this, it’s going to be difficult and take a long time for the coin to become valuable and get to $1.

From all the past price movements and major increases, Dogecoin is expected to show slow and steady growth. This makes it ideal for buying and holding rather than trading in the short term.

If you want to profit from DOGE, you should hold the currency for a long time while the value increases. 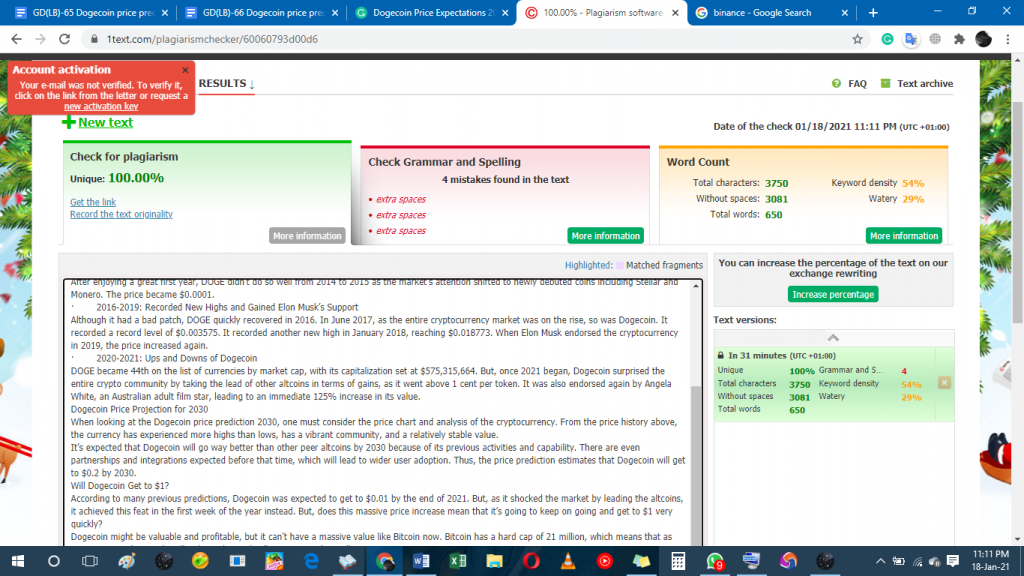