DOGE primed for a 30% rally to new highs


Dogecoin price slid into consolidation after a 1,100% rally between January 28 and 29. But a recent spike in buying pressure allowed DOGE to resume its uptrend.

Dogecoin price prepares for another rally

DOGE has surged approximately 40% since it broke out of a bull flag pattern.

The technical formation forecasts a 90% target, that could see Dogecoin price climb another 30% to reach a new all-time high of $0.10. 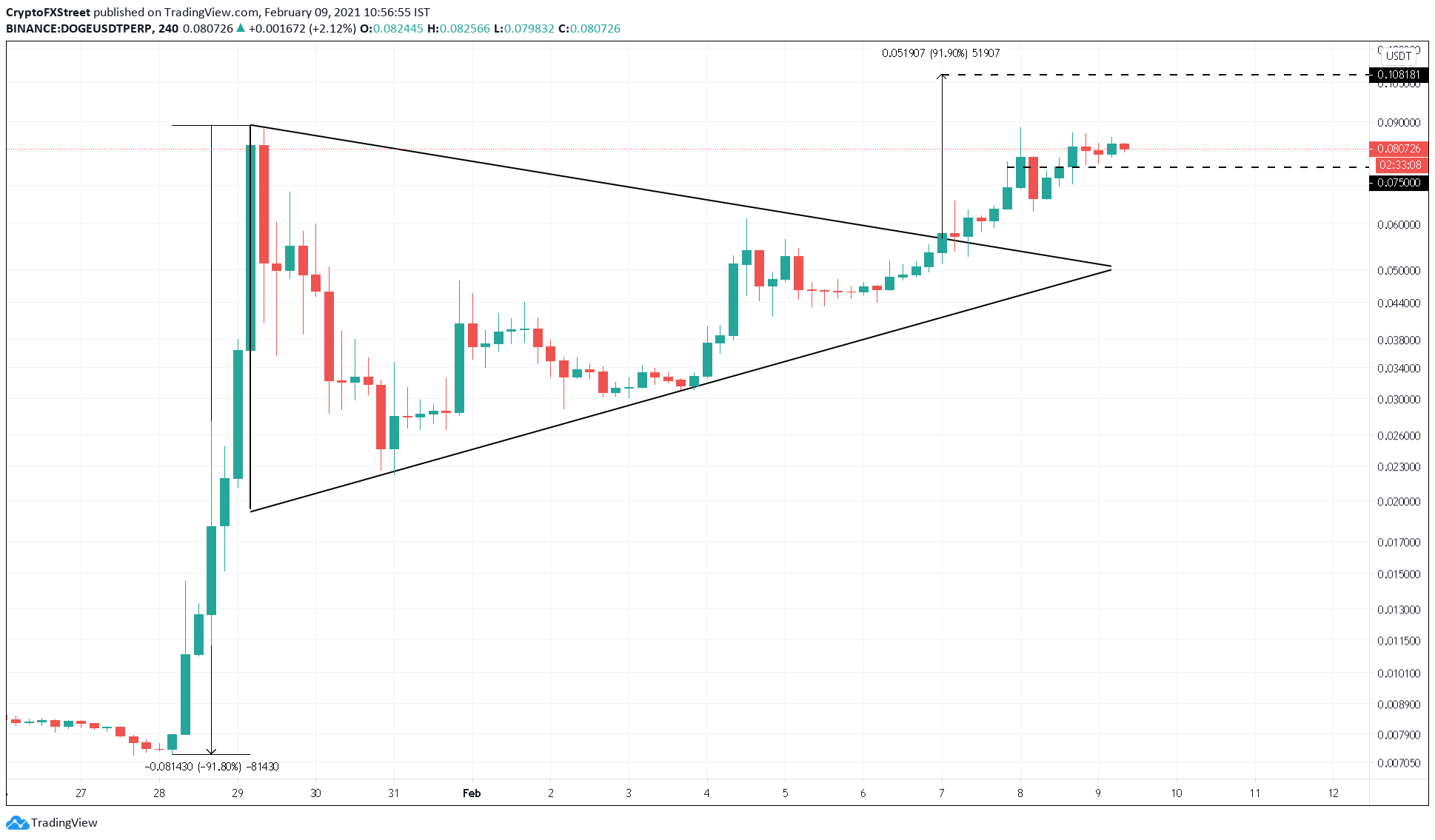 Several celebrities including Elon Musk and Snoop Dog have endorsed Dogecoin causing FOMO among retail investors. Despite the high levels of speculation around this cryptocurrency, the bearish signs cannot be overlooked.

In a recent report, The TIE’s stated that the social engagement around Dogecoin has skyrocketed. Nearly 1 million tweets were sent out about DOGE surpassing Ethereum-related tweets by 200,000. The meteoric rise in social activity points to an increase in notoriety by the meme coin.

Usually, such a significant increase in social volume signals that the market has reached peak hype. This is when investors become irrationally confident about the coin’s potential. Hence, a continuation of the uptrend is unsustainable and opens an opportunity for downward price action. 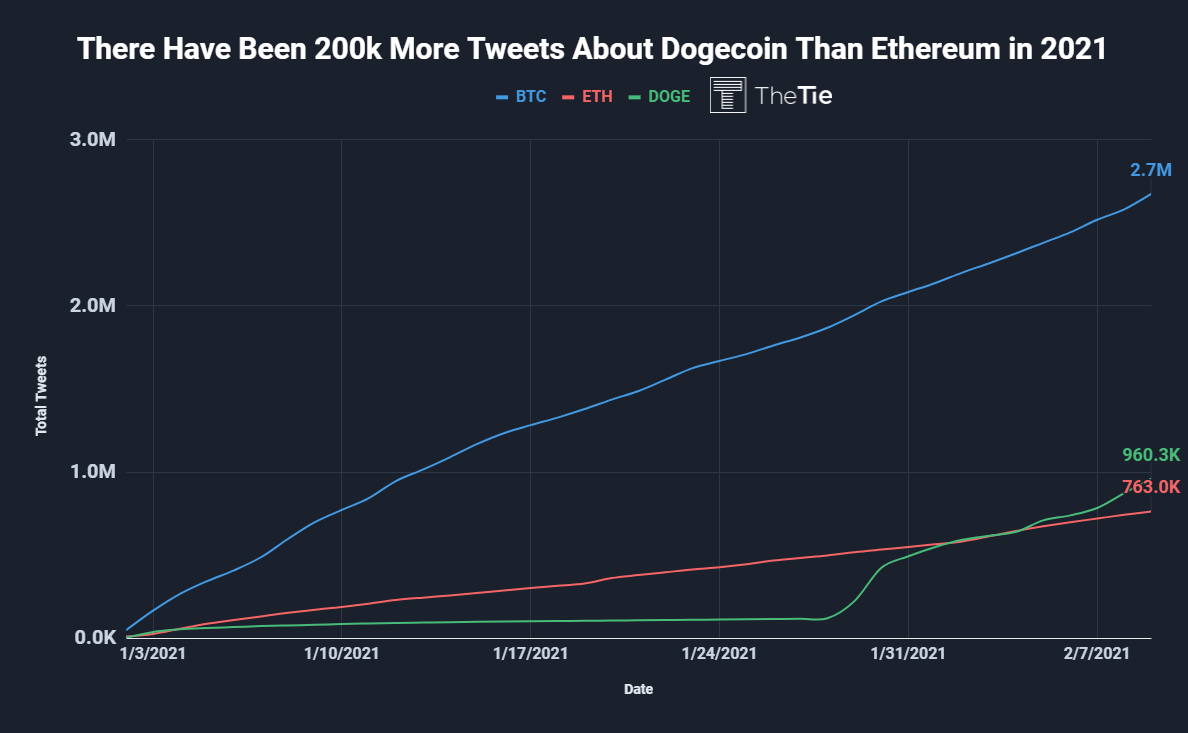 Coinmetrics’ on-chain data shows dormant DOGE tokens from 1 to 5 years on the move. The resurgence of inactive coins suggests that long-term holders are getting ready to take advantage of the recent price action to book profits.

Dogecoin’s realized market capitalization also spells trouble after experiencing a 550% increase in the last few  weeks. Such market behavior indicates that most of the DOGE tokens were purchased recently by investors.

Realized market capitalization is a metric that considers the price at which the coin was last moved, which paints an accurate picture of the network’s participants. 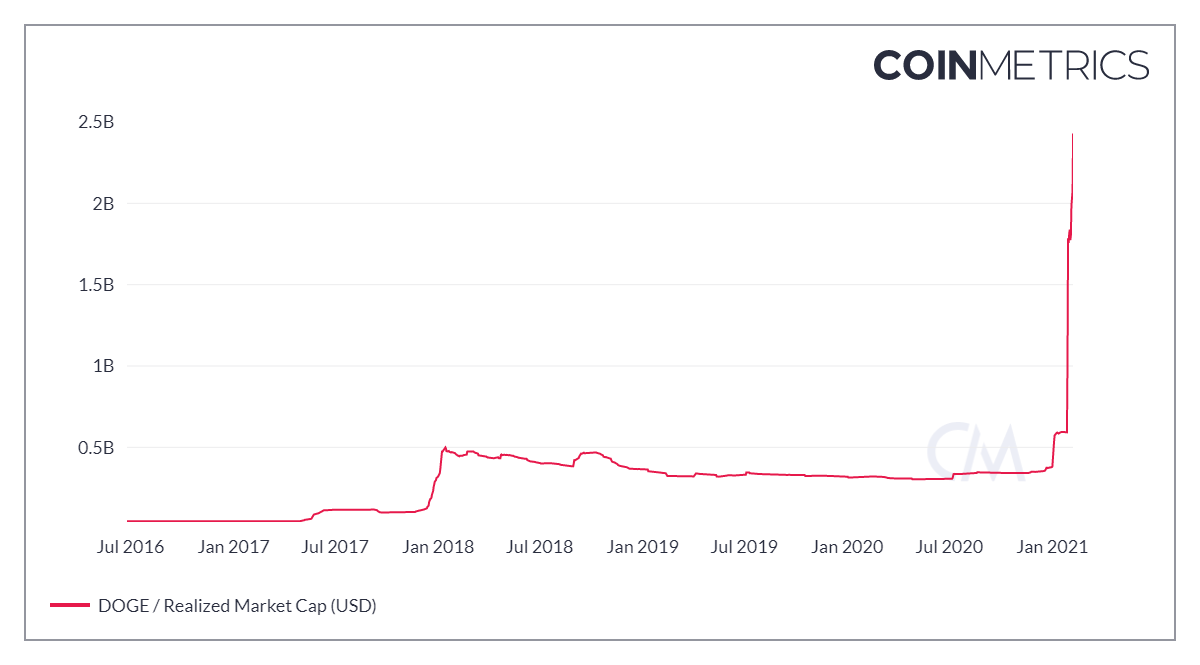 Therefore, a spike in selling pressure leading to a breakdown of the support at $0.075 could put a lot of these recent investments in the red. Based on IntoTheBlock’s In/Out of the Money Around Price (IOMAP), roughly 50,000 addresses previously purchased 9.02 billion DOGE around this price level.

Hence, if this support buckles under selling pressure, it could trigger a sell-off invalidating Dogecoin’s bullish thesis.

In such a case, Dogecoin price could drop to the next stable support at the $0.070 level where 37,000 addresses purchased 2.35 billion DOGE.

Previous articleWhat is Dogecoin: the joke crypto loved by Elon Musk and growing faster than Bitcoin
Next articleBitTorrent Coin Rising to 150%, Is It The New DogeCoin, Price Prediction & Live Chart