After a series of bizarre events in the traditional financial world this week involving Reddit, GameStop, and the international stock markets, CoinMarketCap has added a data line for ‘WallStreetBets’, adding a disclaimer: “Please note that this is a joke and no such asset exists. If you see similarly-named projects, please perform the requisite due diligence.”

Indeed, the bizarre events of this week have raised a number of important questions for regulators and trading platforms alike. For example, Robinhood eventually decided to halt trading and buying of certain stocks (if you have not heard about this already, we will get into that a bit later.)

The bizarre events of this week appear to have been a positive thing for crypto markets (at least, in the short term): crypto markets have added $140 billion to the sector’s total market cap overnight, once again surpassing the $1 trillion mark.

Beyond that, as CoinMarketCap’s joke seems to indicate, cryptocurrency investors and platforms may be seeing a bit of hypocrisy when it comes to the ways that crypto markets are perceived compared to traditional markets.

Indeed, cryptocurrencies are often spoken about as being easily-manipulated, highly-volatile markets with little to no safeguards in place against pump-and-dump schemes and other kinds of market manipulation in place. While this may have some truth to it, the events of this week may point toward another uncomfortable truth: traditional markets might not be any better.

Folks spent a decade saying Bitcoin was a scam.

Now they’re realizing they had their money parked in scams the whole time.

The Epic Rise of ‘Meme Stocks’

Here is what went down this week.

Commission-free online brokerage Robinhood, which has become a favorite amongst millennial traders since its launch in 2013, was forced to shut down trading on a number of stocks. The stocks that Robinhood targeted included GameStop and AMC: so-called ‘meme stocks’ that have been embraced by a rogue community of Reddit traders (seriously).

What happened? Traders in Reddit’s r/WallStreetBets group and a similar Discord group made the decision to pump large amounts of money into GameStop Corp. (NYSE: GME). GameStop, which has been struggling for a number of years, was the target of many short-sellers on Wall Street. Realizing this, traders in the r/WallStreetBets group decided to squeeze the institutional giants that had bet that GameStop would fall further. 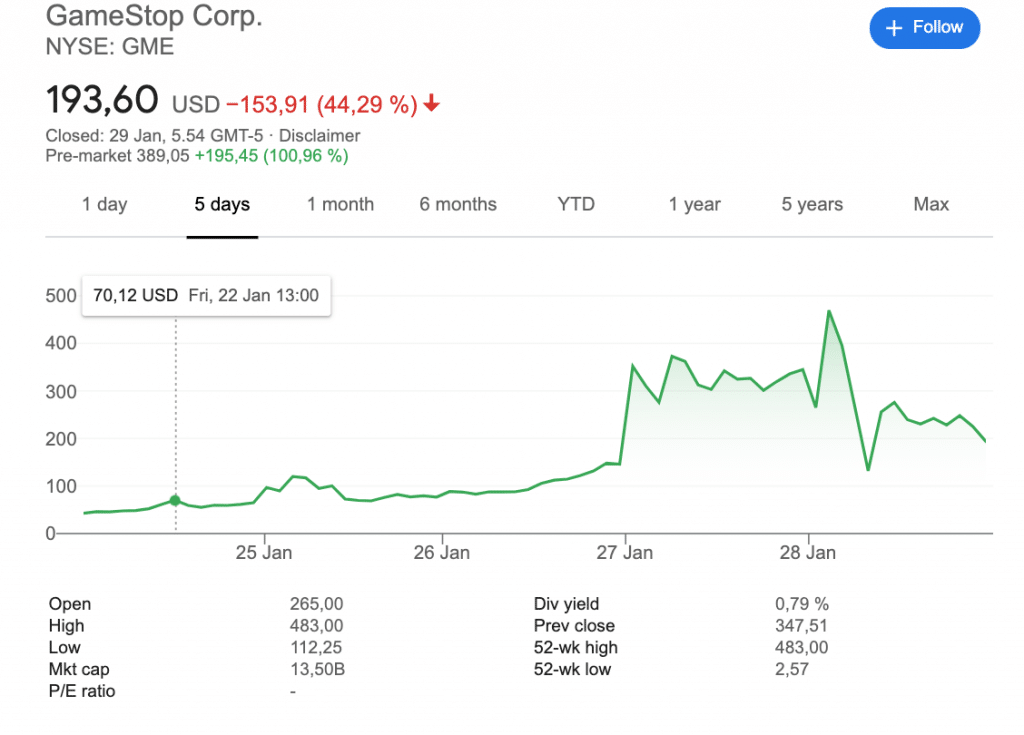 If you think that a group of Reddit traders could not effect much change on GameStop stock price, you would be wrong. What seems to be a huge number of the group’s two million users jumped onto the scheme, continuing to buy the stock, and pushing its price increasingly higher over the course of a few days, the price of Gamestop stock skyrocketed up to 1,700%. At press time, the price was up 1162.42% over seven days (thanks, CoinMarketCap.)

Lovely to have all these new followers .. can we just check that you know that you’re following The World Wide Robin Hood Society in Nottingham and not the Robin Hood App .. if so .. a big welcome from Sherwood 🙌

The higher the price rose, the more that the investors who had shorted the price had to buy in order to cover their losses. Wired reported that the resulting effect “turned a snowball into an avalanche,” which evidence that some institutional traders may have also taken sides with the Reddit traders.

But eventually, Robinhood pulled the plug (a course of action that some memesters have described as ironic, coming from a platform that is named after a folk hero who steals from the rich to give to the poor.)

The company shut down buying and trading on these ‘meme stocks’, the company still allowed its users to sell the stocks, most of which still rank as some of the most widely held on the platform. However, as Wired reported, “otherwise? No dice.” Robinhood has since sent a message to its users explaining that the move was temporary: “we temporarily limited buying for certain securities this morning,” the message said. The company also posted a blog post about the week’s events.

“Starting tomorrow, we plan to allow limited buys of these securities. We’ll continue to monitor the situation and may make adjustments as needed.”

While the move was drastic, a number of legal experts say that Robinhood’s fast and hard decisions were well within the company’s legal jurisdiction. In fact, some analysts have even said that it could be that traders in the r/WallStreetBets group could be the target of legal investigations into market manipulation.

Indeed, the events that surrounded the GameStop stock pump have had a number of implications for other trading platforms as well as the regulators that oversee them.

Daniel Hawke, a former Chief of the Securities and Exchange Commission’s market abuse unit and current Partner at Arnold & Porter Kaye Scholer LLP, told the Wall Street Journal that: “if they are all egging each other on using a social media platform, they are effectively engaged in a crowdsourced pump-and-dump scheme.”

They “are making no effort to conceal their apparent intent to manipulate the price of the stock,” he explained.

Additionally, on Wednesday, Nasdaq Chief Executive, Adena Friedman told CNBC that the Nasdaq will make the decision to halt trading if they see correlations between social media chatter and an astronomical rise in a stock’s price.

We now need to know more about @RobinhoodApp’s decision to block retail investors from purchasing stock while hedge funds are freely able to trade the stock as they see fit.

As a member of the Financial Services Cmte, I’d support a hearing if necessary. https://t.co/4Qyrolgzyt

However, at the same time, some lawmakers are questioning whether or not trading platforms have the right to bar retail traders from taking specific actions on their exchanges at will: Representative Alexandria Occasio-Cortez (D-NY) wrote on Twitter that Robinhood’s actions were “unacceptable,” a sentiment that Senator Ted Cruz (R-TX) tweeted that he “fully agree[d]” with.

“We now need to know more about @RobinhoodApp’s decision to block retail investors from purchasing stock while hedge funds are freely able to trade the stock as they see fit,” Ms. Ocasio-Cortez wrote. “As a member of the Financial Services Cmte, I’d support a hearing if necessary.”

The sentiment expressed by Ms. Ocasio-Cortez and espoused by Senator Cruz seems to be the opinion of the r/WallStreetBets traders who participated in events. A Twitter account belonging to the self-proclaimed ‘Wall Street Bets (WSB) Chairman’ (who, by the way, claims to be ‘NOT ASSOCIATED WITH r/WSB’, recently tweeted that “the government official who stands up for the people and investigates Robinhood will have our support.” Some of Robinhood’s users have already filed a lawsuit against the company after the trading ban.

The government official who stands up for the people and investigates Robinhood will have our support.

However, while trading platforms and regulators are totally up in arms about the events that have surrounded GameStop’s trip to the moon this week, the conversation among retail traders has also been affected. Perhaps frustrated by the institutional reaction to the GameStop gambit, retail investors seem to have turned their attention away from retail markets and toward…(drumroll please)…

“With All This Going on, Does Anyone Want to Try to Kick off a Dogecoin Rally??????”

Crypto markets, which are still not as regulated as traditional markets, may be an easier target for groups of traders wishing to pump assets unobstructed by pesky regulators and trading platform executives.

Indeed, referring to the New York Post: “even a literal joke cryptocurrency is surging thanks to the new power of retail investors on internet message boards.” According to the post, one Reddit user wrote that “with all this going on does anyone want to try to kick off a Dogecoin Rally?????? It’s really cheap and wouldn’t be that hard to do.”

Wall St will be shocked to find that there is no shutdown switch for crypto.

Sorry I missed your call, I was busy exposing Wall Street and watching Dogecoin moon.

But, traders did not just pour their cash into DogeCoin. Forbes reported yesterday that “as a whole, the cryptocurrency market, today add[ed] $100 billion in value to again come within touching distance of $1 trillion.” Today, the $1 trillion market cap milestone is in the rear-view mirror: at press time, crypto’s total market cap was $1.07 trillion, having added a total of roughly $140 billion overnight.

It is also important to note that many Dogecoin buyers did not have to switch platforms to buy their DOGE: as Frank Chapparo, Director of News at The Block pointed out on Twitter: “Robinhood won’t let users buy $GME $AMC or $NOK, but they’ll let them buy Dogecoin. Let that sink in for a second.”

Robinhood won’t let users buy $GME $AMC or $NOK, but they’ll let them buy Dogecoin. Let that sink in for a second.

This seems to be the attitude that many Reddit traders are taking. While DogeCoin is down from its 24-hour peak, the hype around DOGE seems to be far from over. Of course, because the DogeCoin rally seems to be born almost completely from hype, DOGE is likely not a ‘safe’ bet for any investor. 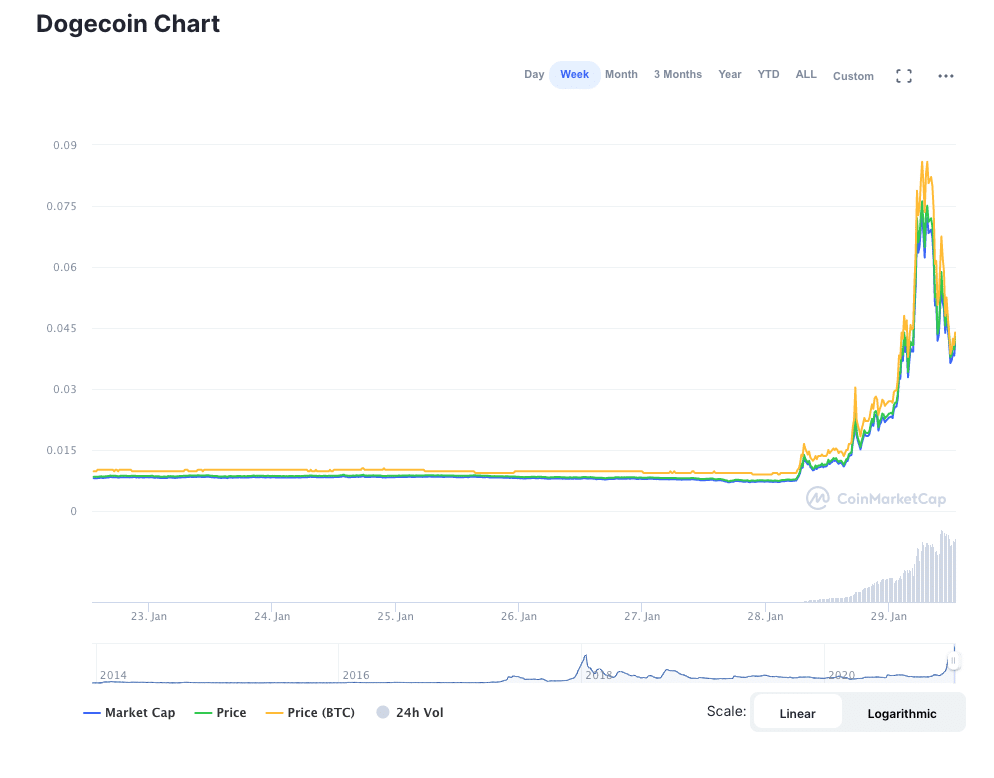 However, undaunted it may be, some DogeCoin investors have their eyes on the skies. One user in the r/DogeCoin subreddit submitted a post entitled “32K – Wall Street Bets Taught Us That IF WE TRUST EACH OTHER AND ACT AS PARTNERS, WE CAN MOVE MOUNTAINS!!” At press time, the post had over 7,000 upvotes.

The user, operating under the moniker u/stalwart, wrote that: “[…] I think it’s important that we trust each other. We are partners. I’m not giving financial advice. I’m telling it like it is. We are ‘MEMBERS’…LET’S STAND TOGETHER. We can do this. We can make history. This week has been like nothing anybody has ever seen. But, we have power here.”

32K – Wall Street Bets Taught Us That IF WE TRUST EACH OTHER AND ACT AS PARTNERS, WE CAN MOVE MOUNTAINS!! from r/dogecoin

At press time, the price of DOGE appeared to be correcting from the short-term pump that pushed the price to new all-time highs. While DOGE was still up roughly 250% in 24 hours, the price had decreased roughly 50% from its 24-hour high and appeared to be continuing along its way down.

Crypto Markets See Green across the Board

DogeCoin is not the only asset that seems to have been boosted by this week’s bizarre market events. At press time, Bitcoin showed a strong rebound from its dip to $30K with price levels around $36,000. Ethereum (ETH) was sitting comfortably at $1,360; all but two of the top 10 largest cryptocurrencies by marketcap showed net positive movement over the past 24 hours. 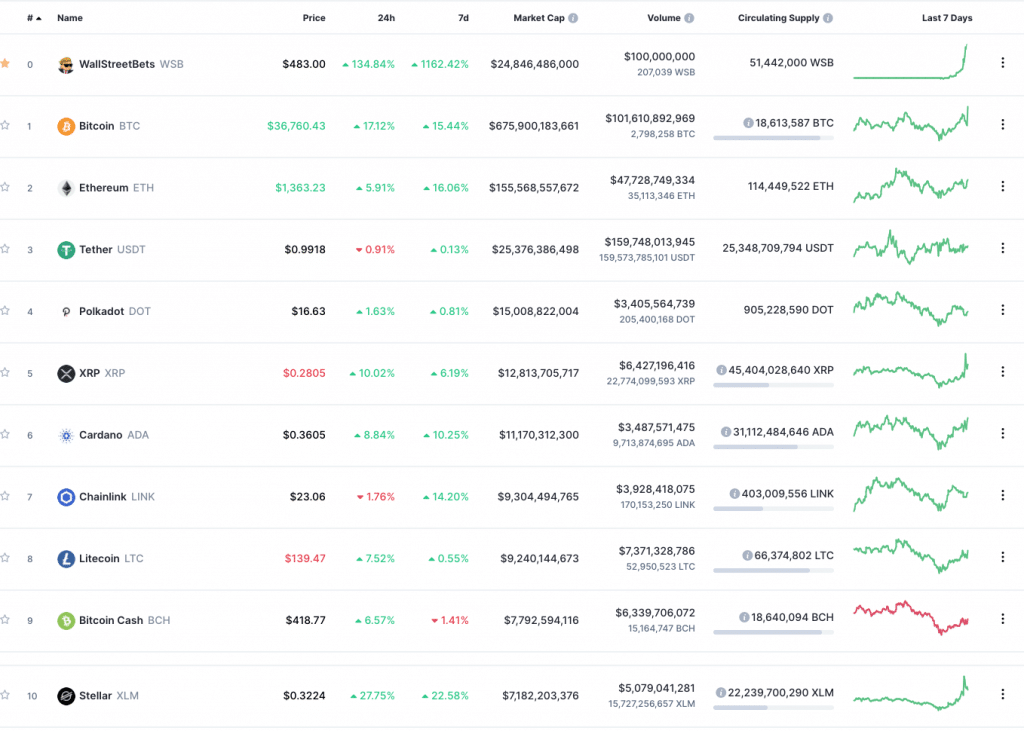 In any case, this tale is far from over. Check back with Finance Magnates to see what happens next.

Finance Magnates reached out to CoinMarketCap to discuss more about the intentions behind its ‘joke’ listing of WallStreetBets, but did not hear back before press time. Comments will be added as they are received. None of the material contained in this article constitutes investment advice.