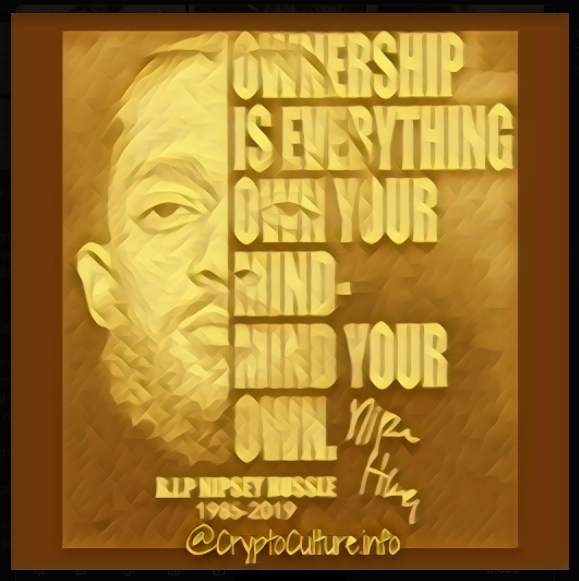 Crypto has rapidly grown since its launch in 2009 and now has become the talk of the town as one of the most profitable ways to multiply your bank balance. Especially after the historical events that have transpired in the financial world on January 28th, 2021. At this point it’s hard to ignore the success and development this industry has made. Many famous personalities from all walks of life have vowed to its benefits. However, one of the most noteworthy interests has been shown by the hip-hop community. It goes under the radar and its has been showcased as much because its sporadic. With CryptoCulture we want to put that connection in the spotlight, the goal is to get us talking about this technology in a positive way.

So let’s briefly walk through some of the connections our most loved hip hop artist have had with crypto.

In 2013, Nipsey Hussle was one of the first hip hop artists to follow the advice of the entrepreneur Marc Ecko and invest in Bitcoin as a start of what would have been his Cryptocurrency journey. Before his untimely death, he was one of the lead vocal ambassadors of this industry/technology. He was applying his ownership philosophy to this industry while becoming a co-owner for a crypto company named Follow Coin that provides trader information to potential crypto investors.

Nipsey Hussle shared his ideas about the cryptocurrency as, “Our influence is leveraged, but we’re always left out until it’s too late. That’s why I thought it was important to be involved as an entrepreneur and to be vocal and bring it to the hip-hop consciousness so that people who have resources and assets available can participate.” – XXL

In a late night 2013 tweet Snoop said “My next record available in bitcoin..” that’s what the Hip-Hop legend Snoop Dogg had to say about cryptocurrency. DJ Khaled also showed his interest in storing digital cash by posting pictures of a digital wallet app called Centra in 2017. Ghostface Killah took his obsession with cryptocurrency to new heights when he launched his cryptocurrency business named Cream Capital in 2017.

Bizzy Bone was hype when talking about Bitcoin as the new wave. He said, “The world is changing and we have to change with it.”

Other top-of-the-line rappers have also identified with crypto, not only in investing but also in including facets of the cryptocurrency in their artwork too such as in lyrics and song titles.

Furthermore, Mayday and Murs showed their enthusiasm by creating a whole song on Bitcoin named “Bitcoin Beezy” in 2015.

Keep learning because, life does not stop teaching.