The recent spurt is attributed to a possible partnership with GameStop Corporation (NYSE: GME) for a non-fungible marketplace, as per GameStop Due Diligence, a website that tracks the Mainstreet gaming marketplace.

Why It Matters: Ethereum hit an all-time high of $4,455.74 at end-October and on-chain data analyzed by CryptoQuant indicates that the number of Ethereum withdrawals on centralized exchanges is increasing lately.

Retail investors are heating up the crypto market.

Looking at on-chain data, the number of $ETH withdrawals on centralized exchanges is increasing lately.

On the Bitcoin side, on-chain analytics firm Glassnode noted that the current levels of profit taking are “mild” — in spite of the fact that the apex cryptocurrency too reached an all-time high of $66,930.39 twelve days ago.

“It appears that current holders are by and large unwilling to move their coins here, and are waiting for higher prices,” wrote Glassnode in a blog.

Using the Spent Output Profit Ratio (SOPR), which is the profitability of spent Bitcoin relative to the realized value on a daily basis and ignoring coins younger in age than one hour by using the Adjusted SOPR (aSOPR) to filter out day trading, Glassnode suggested that a positive aSOPR during consolidation is “constructive.”

The reasoning given in the blog was that the “market can absorb the sell-side whilst maintaining price support levels.”

However, not all analysis on the current state of the markets is equally bullish. Marcus Sotiriou, sales trader at the United Kingdom-based digital asset broker GlobalBlock, noted that there is “cause for concern” as Open Interest on Bitcoin Futures is nearing an all-time high. 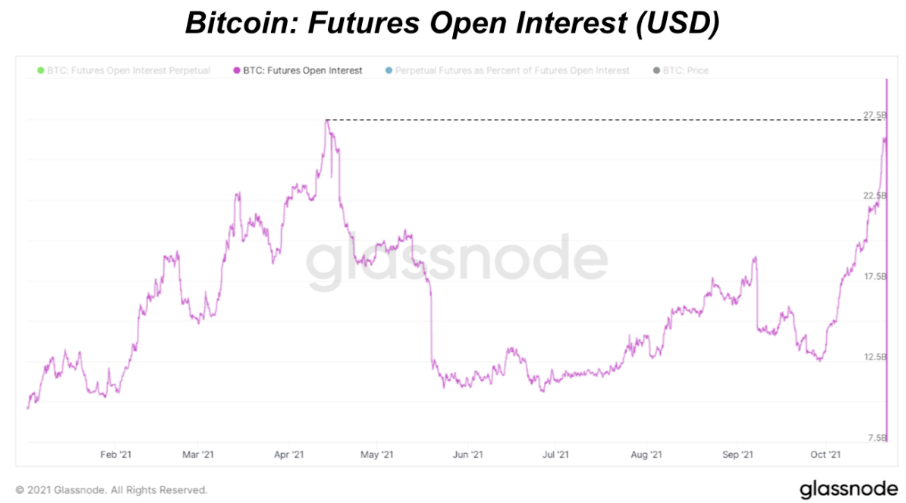 Sotiriou termed this as a “bearish signal” as it implies there is more leverage in the system which increases the chance of a liquidation event.

“If Bitcoin is being used as collateral there will be an increased chance of a mass-liquidation event, as the price drops lower in tandem with long trading positions,” Sotiriou wrote in an emailed note.

The analyst also pointed out that the euphoria surrounding meme coins, particularly Shiba Inu, could contribute to a leverage flush in the short term due to a rise in retail traders.

Read Next: How Bitcoin Miners Have Reinvigorated This Rural American Town

© 2021 Benzinga.com. Benzinga does not provide investment advice. All rights reserved.

(For beginners, it may help to read our explainer articles on Blockchain and Cryptocurrency before attempting to learn about public vs private blockchains...
Read more

Cheugy, Chipotle, and Dogecoin Among The Most Mispronounced Words of 2021

PHILADELPHIA (CBS) — Eagles center Jason Kelce may have been named as Philadelphia’s Walter Payton Man of the Year Award nominee for the...
Read more

To HODL or not to HODL: A crypto-millionaire’s story

Glauber Contessoto and his aunt, Cristiane Pereira, are probably fine talking religion or politics this Christmas; they’re close. But there’s one topic they may...
Read more

(For beginners, it may help to read our explainer articles on Blockchain and Cryptocurrency before attempting to learn about public vs private blockchains...
Read more

In 2020, the United States Federal Reserve embarked on a massive dollar printing journey, necessitated by the need to deliver financial stimulus...
Read more

Nifty Gateway Wallet-to-Wallet Feature To Save 75% On Ethereum Gas Fees...