Dogecoin May Break Out With $0.43 In Target Range

is showing signals that it may advance higher.

Dogecoin is the latest meme coin that looks poised to resume its uptrend. Both technical and on-chain metrics suggest that DOGE could possibly enter a new bull run in the short-term.

Dogecoin appears to be after enduring a five-month-long consolidation period.

Since late April, the tenth-largest cryptocurrency by market cap has been developing a descending triangle on its daily chart. As DOGE’s price recorded a series of lower highs, the $0.17 level has acted as support. 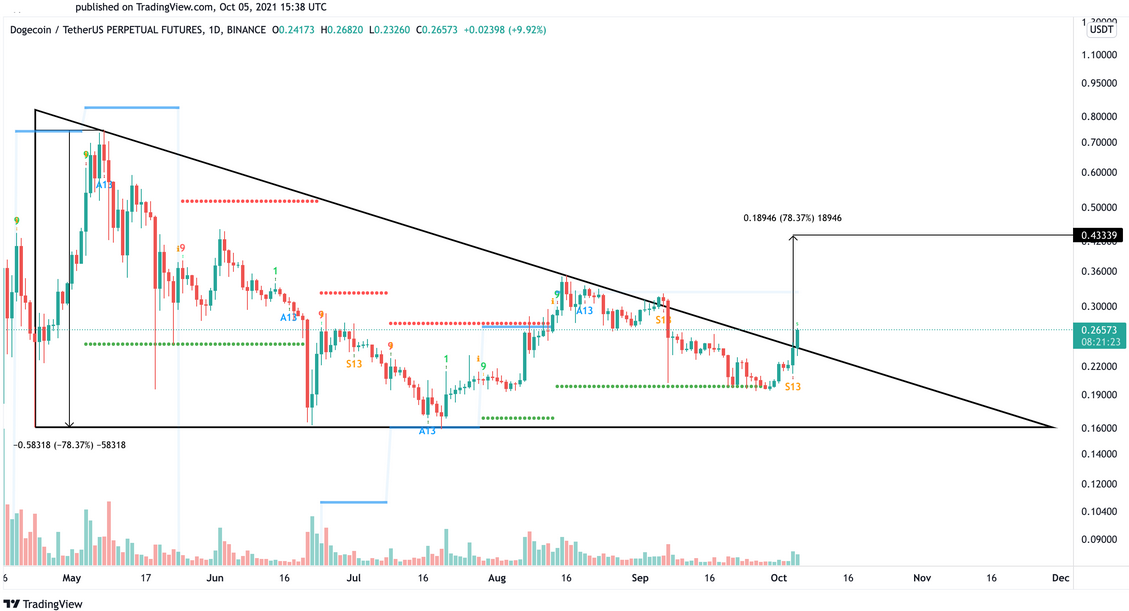 A recent spike in buying pressure appears to have pushed Dogecoin beyond the triangle’s hypotenuse, which can be considered a breakout. If DOGE can print a daily candlestick close above $0.26, it is possible the coin could enter a 78% bull rally toward $0.43.

Such an impressive bullish target would be determined by measuring the triangle’s y-axis and adding that distance to the breakout point.

The number of large transactions on the network (i.e., those with values greater than $100,000) can act as a proxy to measure institutional players’ and whales’ activities. A significant increase in large transactions could indicate that wealthy investors are beginning to position themselves for a new bull run.

Roughly 2,200 large transactions are currently being executed on the Dogecoin network, representing a 100% increase since Sept. 28. The rising on-chain activity might suggest that whales are starting to take control of the price action.

If this metric starts to record a series of higher highs, the odds would likely favor the bulls, and DOGE may achieve its upside potential.

It is worth noting that a decisive candlestick close above $0.26 must occur to validate the bullish outlook. Failing to regain this level as support could result in a steep for Dogecoin as $0.20 and $0.17 are the most significant interest areas underneath it.

Disclaimer: Fusion Media would like to remind you that the data contained in this website is not necessarily real-time nor accurate. All CFDs (stocks, indexes, futures) and Forex prices are not provided by exchanges but rather by market makers, and so prices may not be accurate and may differ from the actual market price, meaning prices are indicative and not appropriate for trading purposes. Therefore Fusion Media doesn`t bear any responsibility for any trading losses you might incur as a result of using this data.

Fusion Media or anyone involved with Fusion Media will not accept any liability for loss or damage as a result of reliance on the information including data, quotes, charts and buy/sell signals contained within this website. Please be fully informed regarding the risks and costs associated with trading the financial markets, it is one of the riskiest investment forms possible.

Why the Bitcoin and Crypto Communities Are So Skeptical of Worldcoin

Binance US explains why Bitcoin fell to $8,200 on its exchange yesterday | CryptoSlate

Six things to know about the Shiba Inu coin cryptocurrency

Why the Bitcoin and Crypto Communities Are So Skeptical of Worldcoin

Binance US explains why Bitcoin fell to $8,200 on its exchange yesterday | CryptoSlate